Sunday morning, wanting to write up what is a bit of a big thing in my small world and definitely may bring some closure but of course never full closure as it shouldn’t to my meandering through this life or at least one significant aspect to it but after one paragraph we were off to Long Shan Village which consists really of only a couple of streets with commerce and is a ten minute bike ride away. 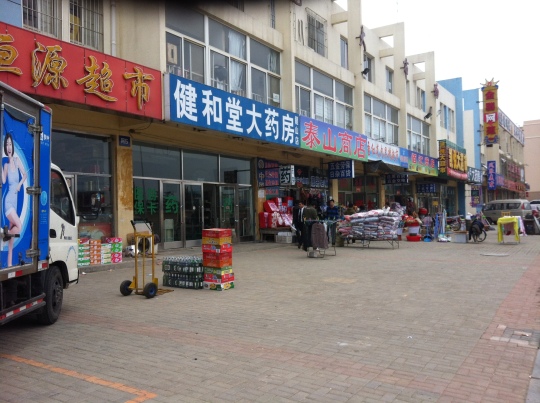 This is our favourite shopping area as it is so local and of course cheap, much cheaper than going to nearby Jinshitan or taking the shopping bus from Campus Village as we did yesterday into Kaifaqu, the centre of the DDA (Dalian Development Area) where our veggies at the green door (our name for it as we have no idea what the lettering in front says and of course we would not be able to say it if we did know) cost twice as much as at Long Shan – see Narda below buying the week’s fruit… 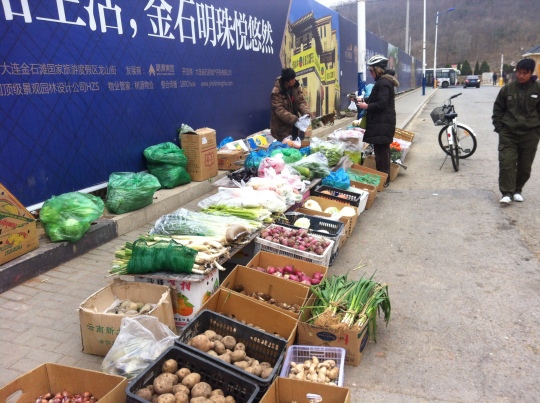 The destination was our local stationary store to get bits of pieces we both needed for school. Narda got three pairs of Crocs for 20 RMB a bit over three US dollars, not needed for school but cheap shoes and a woman… Imitations? Who cares? What strikes me as a fun shop that would not be in Australia or the States is that at this shop one could buy pens, paper, computer bits and pieces; I got a laser pointer light for my classroom and a bag to put camera equipment in. Narda got some more notebooks with some strange English-like sentences, three pairs of Crocs, shoelaces; and one could also buy strong alcohol which sits on the same shelf as plastic toys but the best of all is on the way out one could buy an ice cream and fireworks. We stopped and looked at the firework rockets and the shop keeper waved her arms and said ‘booom’ and laughed but we gave it a miss this time – see below… 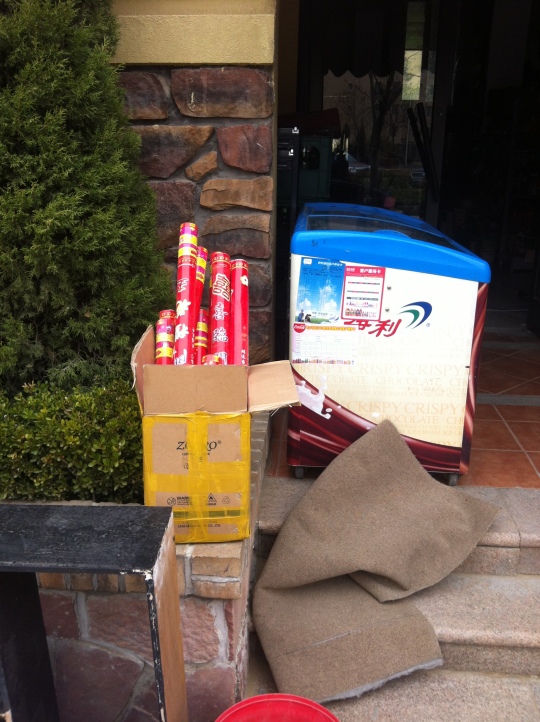 I first heard of Facebook when I was teaching a speech class at the State University of New York in Albany. Students were presenting speeches about something that was new and interesting in their lives and one student had just been invited to join Facebook which at that time no one else in the class had heard of it. This was about 2005 and so we all became her friends. It seems so long ago when there were only a few college students in Facebook – joining other students in Boston. I still have that account but as I no longer have my university email I do not use it. A year later I made a Facebook page for my son who had decided to leave his life behind; he was a pitcher for the LA Dodgers living in the States when he left the Dodgers in Florida, not telling anyone (they looked all over for him as they were concerned about his mental well-being that week – they said) on August 13th due to a quarrel with his girlfriend who was appearing in the Australian Idol series in Sydney.

When Leigh was 16 he was clocked at 91 mph by an Atlanta scout; more scouts followed. He was courted by Atlanta, Minnesota, and Arizona as well as the Dodgers. I wanted him to go to Arizona as I liked their youth program but at 17 he signed with LA and that was it.

He arrived in Sydney after the 20 hour trip from Florida (I still have his return ticket) spent a day with his girlfriend and booked the highest floor and went off the 15th story balcony of the Novotel Sydney Olympic Park Hotel. He was facing the baseball stadium where he had practiced with the Australian Olympic team for the upcoming Athens game. I went there for the first eight years after and left flowers where he died but I have not gotten to Sydney the past two years though for the tenth anniversary I plan to go this year.

I made a Facebook page for Leigh and a lot of his friends have written over the years, especially on his birthday – he has hundreds of friends.

In 1998, Leigh, playing for the Australian U 16 (he was 15) squad in a series in Johannesburg, South Africa, stayed with a family, as all the team did. In his belongings several years ago I found the address of the people he stayed with and wrote them. At some point when I was reading letters people had written in his Facebook Timeline I saw one from a girl who said she knew him from his stay in Johannesburg. I do not go to his page much these past few years but I thought I would check it a few days ago. It is difficult to see his friends living their life, most with children and know he should be there too – and be pitching in the major leagues. He worked so hard at it. When he was ten he use to tell people he would pitch for the New York Yankees one day and of course being the non-baseball country of Australia people would tell him he should play cricket or footy. We use to go out every morning before school and he would do a hundred pitches and again every day after school. Sacha use to join us for years but then he became more interested in basketball, then graffiti then rap and hip hop and now he is the alive and successful one living in Australia and Leigh is just a memory.

So back to Facebook; I saw this person from Johannesburg had written in Leigh’s Timeline that she had 6 letters each about nine pages long and if I wanted them I could send an address where to send them to. She had moved to Perth a few years ago and recently had these letters sent to her. Now she will be sending them to my in-laws in Adelaide and I will have them in August. I am so excited about this – to have something that my son wrote in the time before his death. All I have is a very long goodbye letter to his girlfriend and why he was going to leave his life. It is the saddest thing I have ever read. I may find these letters waiting for me just as sad but I hope not.

Years ago I even had a lot of Leigh’s Facebook friends playing Farmville with me. It started off with me playing Farmville and not having friends enough to give me gifts and Narda thought it was just silly so I created a bunch of accounts; dead people: Leigh, my brother, my father, mothers (being adopted I had two mothers, both dead, both Farmville friends), a couple of ex-girlfriends (being dead I suppose they are ex), a dog and a series of me (Farmer Terrell, Saint Terrell, Another Instance of Terrell, and etc.). 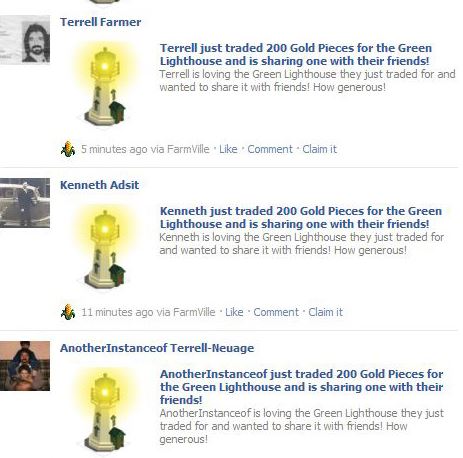 http://neuage.co/LeighFarmvilleMarch2011.html is a short video of my farm ‘growing’. I quit after a couple of years and the past two years I have been too busy or too sane to continue with my farms.

A couple of years ago I started an online project on with a professor from Singapore who was teaching in London and was looking at how people deal with death on-line. I lost contact with her in my past move to China and will just continue with my own research and project on dealing with death on-line. 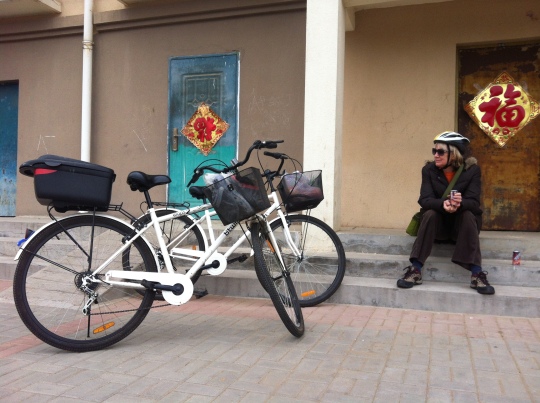