Jaipur in the state of Rajasthan
25 January, Thursday

Narda slept most of the way from Agra to Jaipur. We had first class sleepers which were comfortable. I sat up the whole way (six hours) and played with some Photoshop stuff.

We got to Jaipur after eleven pm and took the first tuk tuk driver we spoke with. For 100 rupees he got us to our hotel and along the way he told us that he had fallen on hard times and he would give us a tour for the day for 500 rupees (less than $8 USD). He did not have a card or website (very few do) but he gave us his brother’s phone number if we were so inclined. I did write it down, but we never got in touch again. The reason being that every time we walked out of our hotel, restaurant, shop, there would be dozens of tuk tuk drivers offering their services. When we said we were just going for a walk people would walk alongside us offering tours, guides, rides, marijuana, hash, even opium, along with carpets, and textiles to view and purchase.

The Anaraag Villa (http://www.anuraagvilla.com/) was quite a change from our place in Agra. Both were around $20 USD but this place was heaps better with a garden that filled with peacocks in the morning and evening (I counted twelve once). And the food was excellent for the whole week.

We spent most days wandering around our neighbourhood, a couple of times we took a random bus ride into town and one day we had a tuk tuk drive us around. 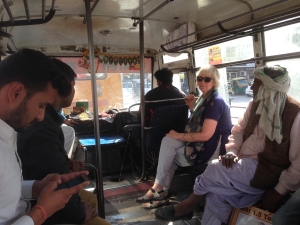 The famous places are the forts, which we went past but not inside, and the Pink City. I bought a new suitcase as the wheel fell off the one I have used for the past couple of years, Narda got dresses and scarves and generally we just chilled.

We walked for a couple of hours in the Pink City (the paint was produced from a calcium oxide compound), where, once, long ago, everything was pink, though now it is all a bit of a mildewed brown. At a restaurant we met a couple of fellas from Albany, New York, which is where I am from, I grew up twenty miles away in Clifton Park, New York, though I left there in 1965. Narda and I taught in Albany, New York 2002 – 2007 so I did have another run at that town. We saw them again several days later in Jaisalmer and had a chatty evening with them. We are on one of the tourist treks between cities that people go to one after another, but it is still interesting to see people from one’s obscure hometown.

Below is the Hawa Mahal (palace of winds) which is really just a front – there is no building in back.

Getting around Jaipur tuk tuks

Amer Fort…It was constructed by Raja Mansingh in the year 1592.The red sandstone and marble stone construction reflect a blend of Hindu-Muslim architecture. We didn’t go inside but we got a lot of photos of the outside.

The Anaraag Villa has been a real treat. The building is beautiful, 3 stories with lovely wall and ceiling frescos and marble floors. In the back a shady garden, peacocks grazing and tables and chairs where you can eat and relax. Only issue is the flute player who comes during breakfast times, playing his wooden flute to a mechanical drone. It was truly horrible. He played scales over and over again, never changing key. ….for 1 ½ hours. It drove me crazy. I actually asked for him to stop while we had our breakfast and to the credit of the staff here, they accommodated Miss Grumpy!

Jaipur has been nice. The air is much cleaner, the weather fantastic. We have slept well and done some explorations of the Pink city, a section of town with craftsmen and even visited a guru, who told us a whole lot of crap.

Yesterday we decided to go real local and took the bus across town to the World Trade Park. Enjoyed a movie “The Post”…loved it. Took our first Uber home. A nice easy ride.

World Trade Park is an amazing modern plaza for this part of the world. We have not seen anything like this yet. We saw a movie here and ate in there tripped out dinning area. The Uber ride we took cost 200 rupees ($3 USD) for a 45 minute drive. 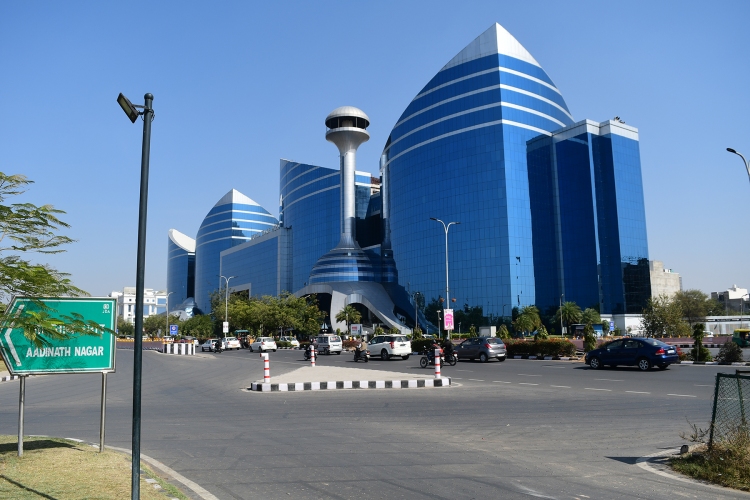 Elephants take cargo and tourists up the mountain.

Elephants take cargo and tourists up the mountain. We went up with a tuk tuk. The driver asked for 200 rupees for three hours of showing us around, we gave him 300 ($4.50 USD). We went to the various carpet shops, dress and scarf shops and worse of all an idiot guru. Our tuk tuk driver told us how he had been ill for years – some stomach thing – and he went to this famous guru who reads auras and the dude sold him some gem and then he was well. The ‘guru’ had a jewellery shop and we were parked in front of a glass case filled with silver and ‘amulets’ and the good ‘guru’ said a lot of stupid things to both of us and we left. (For example, he said I had dementia in my aura – which I ‘decided myself’ to quickly forget; of course, if I purchased some stone – it would help). We were extra upset to discover our poor tuk tuk driver who told us he had a crippled daughter plus two other children at home, his wife had died, and his elderly mother was home looking after the children. This ‘guru’ who had read his aura had sold him an amulet for 3000 rupees to heal him. The tuk tuk driver is lucky to get a couple of hundred rupees in a day. India is filled with sad stories. Everyone we meet has a list of dead people, troubled home situations and just difficult lives. People plead with us to show us things; to hire them for a couple of hours. There are so many more tuk tuk drivers than passengers. We hear stories of drivers getting no passengers for days. This is their livelihood. Then so called ‘gurus’ hustle illiterate people for all they can get from them.

Situated in the middle of Mansagar Lake is the groovy Jal Mahal. It was built by Maharaja Jai Singh II in the 18th century, as a hunting lodge and summer retreat. Not visible is the high level of pollution in the lake with lots of rubbish – I enhanced the colours a bit on my photo to give more blue and less grey and less yuck in the lake. 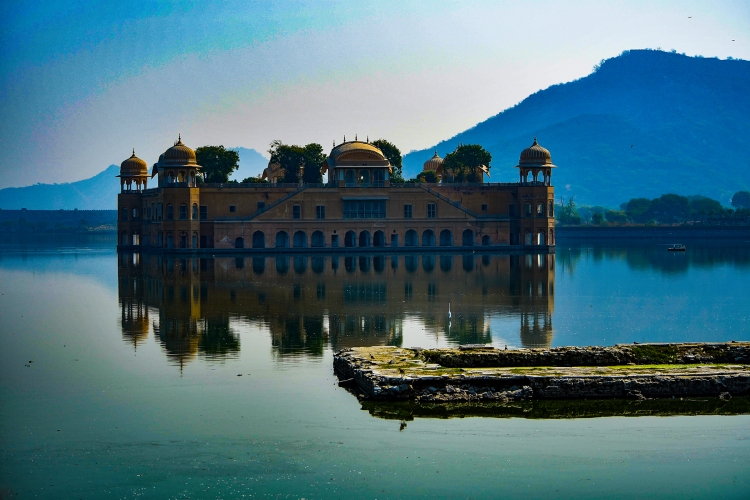 In the evening, as we do at home (wherever that may be at any given time) we watch TV series. We have yet to figure out how to watch television, though we have tried in several cities, so we watch our Netflix series on our laptop. Currently we are finishing up the “The Good Fight” season one; which is an extension of “The Good Wife” that we loved except for the series ending, which sucked.

Narda was back to her Delhi Belly ways so we went to the local chemist and got a repeat of the pills we paid about $35 a piece for in Australia for $1.50 USD for a pack of ten. We didn’t need a script, like going to the chemist in China, if you know the name of the drug, they will sell it, no questions asked. 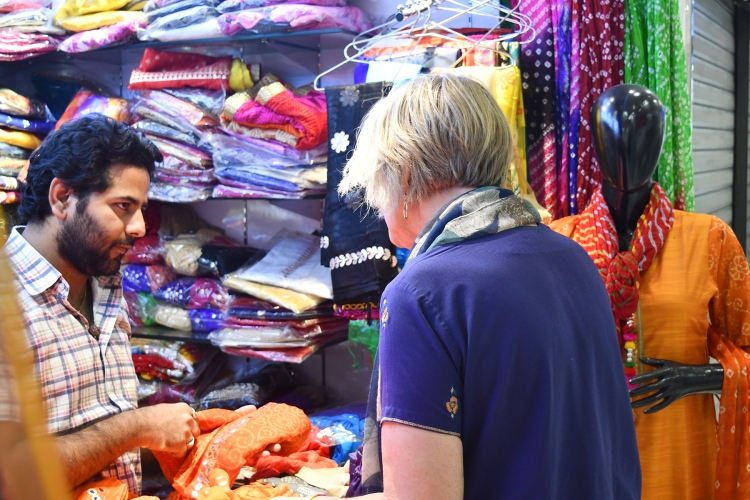 even with Delhi Belly shopping is good

And there is always someone to ask for directions, even if everyone points a different direction.

I also do this blog at our India site which is located at http://neuage.org/india and is often more up to date than this as we are too busy exploring where we are or reading. Currently Narda is reading, “Sapiens: A Brief History of Humankind” and I am reading “Homo Deus A Brief History of Tomorrow” both by Yuval Noah Harari. I have already read the book Narda is reading. We love these books and recommend them to everyone. Any time left, which is little I post my photo textual work at https://plus.google.com/u/0/collection/E_6JaB

Interested in what comes next and not what was. Sole survivor from another place at another time with different outlooks on ‘the way it is' as I am mashing it together as a movie for my next lifetime to view this one so I can do it differently - hopefully on another planet or at least in another realm. For more see http://neuage.org
View all posts by Dr. Terrell Neuage »
« India2018: Agra
Jaisalmer »