The end of another week though a short one at that; a short work-week actually, with the Moon Festival school closure Monday. School as always is an amazing place to be. I had students in my after-school-activities group perform their first newscast that we aired throughout the upper school the following morning. Next week we start doing one for the elementary school too. I named it DAISlive and everyone; students and teachers alike, are onboard with great ideas and contributions. I also got a bit of a promotion to an academic technology coordinator position and though it is a lot more responsibility and I will be here for an extra week at the end of the school year whilst Narda will be going back to the States five days earlier than me, to stay with her son Chris in Atlanta and I have to be back a week earlier at the end of the summer, Narda will hang with her new grand-daughter and family in Adelaide for that week, I am excited about it all. Being an unemployed teacher back in NYC was not fun, thrown out onto the ‘you-should-retire’ heap when the US government is saying we should be working later in life; with what job? one would ask, I am most lucky to be able to use the past decades of work for this perhaps my last hurrah. Working with ESL students with a handful of English words in my computer classes is a challenge – I will go on about this in my educational blog ~ http://neuage.us/edu/blog.html

Our first cooler day after lots of nice hot days. We need to appreciate and ride our bikes as much as possible. We usually go for a bike ride in the morning before school. Everyone says winter is brutal here and goes from November until about March.

Playing the money market, again. Today the US dollar is strengthening against the Aussie dollar. In the past four minutes the US dollar has gone from .96 to .98 cents. Of course when it was worth .60 cents before the US dollar went belly up a couple of years ago we were in better stead; but we will take what we can and today we have to transfer before the US dollar dives again. It is all quite nerve racking. The China Yuan just stays the same day in day out. We get paid partly in Yuan and partly in US dollars. If only I had paid attention in math class some fifty years ago I would be able to figure out whether I should purchase soybeans by the ton in China or in the US or in Australia. Of course why would I do that is beyond reality – my favourite place to exist.

The building in our area is still going on at a frantic pace. The major project is starting to take shape – it looks like something straight out of Southern France; believe it will be a winery. The main building, looking like a cathedral has ornate sides/windows/panels all happening. And the buildings at Chateau Bordeuax across the street are starting to have some rooftop shapes that look French. We may end up with a French village across the street. Of course it will probably be empty like so much of the buildings are in China. Someone told me at the conference in Shanghai last week there were about five million migrants in Guangzhou building – with most of the buildings left empty. Here we have large housing tracks, beautifully finished with no one living in them. China has about zero unemployment because there is a building job for everyone. Of course people cannot afford them so they stand empty or investors purchase them and leave them empty. It is like they are building ghost towns. Hard to imagine there are more than a billion people in this country with so much emptiness.  Perhaps if they started building at a frantic rate in the States there would be zero unemployment too.

We are booking our tickets to Atlanta and back to Beijing then on to Australia for next June – August with something in South America after Atlanta for a week. A nice Saturday to spend money.

Here are some photos I took out of our hall window here at Campus Village this morning:

Our new winery – a touch of France here in China. Across the street this was taken from our hall here at Campus Village, Pebble Beach National Resort in Jinshitan, Dalian China

View out of the hallway window

In the distance one of many large housing tracks with few if any one living in them, this particular one is Yosemite, and we ride our bikes to there to go to the Kangaroo Bar and the Busy Bee shop which is similar to a 7-11 store in the States and Australia only with Chinese products.

Looking toward the hill where Blueberry Cafe – our favorite Friday night dinning place. On the right the blue roof over the new swimming pool 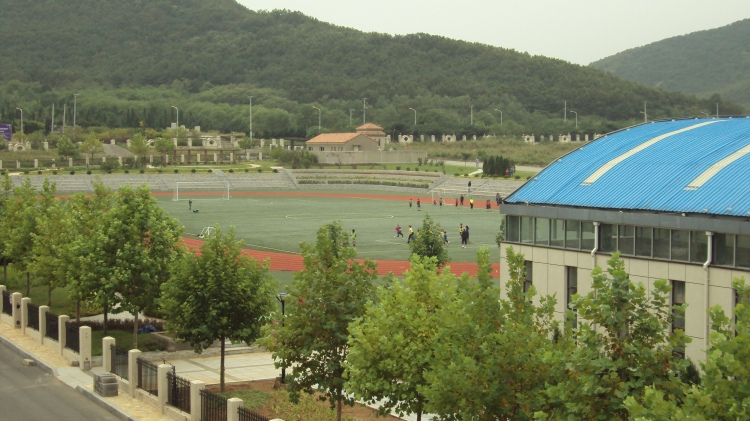 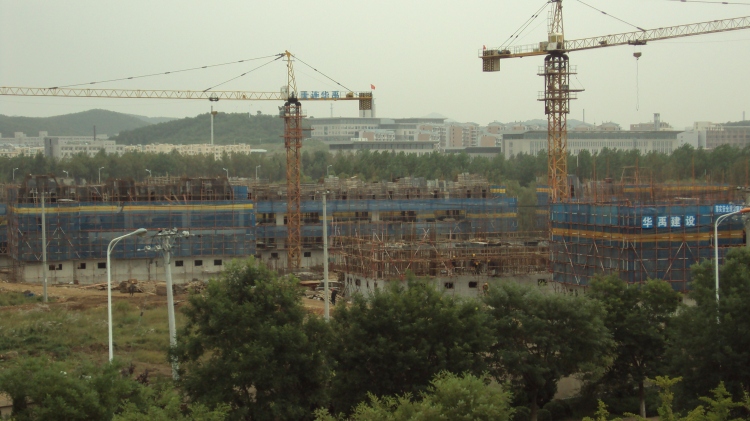 Interested in what comes next and not what was. Sole survivor from another place at another time with different outlooks on ‘the way it is' as I am mashing it together as a movie for my next lifetime to view this one so I can do it differently - hopefully on another planet or at least in another realm.
View all posts by Dr. Terrell Neuage »
« Learning2Connect Shanghai
Tourists for a day »