Following on from yesterday’s blog; https://neuage.me/2013/06/26/lama-temple-and-beyond/ – flying Beijing to Vancouver and on to New York City, arriving at one AM and sleeping a few hours we collected our car rental and plugged in the GPS that Randy Dandurand gave us some five years ago. Great how these things keep working. It had slept in its little padded cell for a year. We used it a year earlier to get lost around in several Southern States.

Isn’t it something how humans can attach human traits to items? When we plugged it in, our British speaking male voice started right off with the directions we needed to get to where we wanted to go. Of course we should know without a GPS, having lived in Jersey City for three years, how to get to our home to see the condition our renters have kept it in but Jersey City is a very confusing place to drive about in, especially in the airport area.

We expected our GPS to be a bit more personal, like ‘how ya doin? Good to see you again. My you have lost weight’ (that was Narda’s thinking wondering why it was not more personal). I want a GPS that talks, not just give instructions in a dry humourless British voice. How about some jokes? Even some sarcasm like ‘I cannot believe you two will not follow what I say and even with my step-by-step instructions you stuff up’.  Maybe some jokes or a little bit of a tour guide of wherever we are. A GPS that sings and hums and whistles, one in which we can put in your name; ‘my my Terrell aren’t we a bit precious today, not enough sleep? You are sounding so cranky if only you would have turned right instead of left – this is not Australia surely you know which side of the ride you should be on….’

I have often wondered why humans personalize stuff. When I lived with Lynn back in the late 1970’s in Lutherville-Timonium, Maryland she had a Volvo named ‘Harvey’. “i am going to take Harvey out for a wash”, “I need to fill up Harvey”, “it looks as if will snow tonight so I will put Harvey inside”.  She named lots of things but I only remember the car. I would ask her about her life with inanimate objects but she committed suicide in 1982.

Narda has exchanges with objects too. I have heard her talk to her computer and tell it she is sorry but it will be replaced, maybe it was a practice line for me. “Sorry you are a bit fragile and slow I will have to put you down…” I bought a new computer yesterday; a Lenovo, 16 gig RAM, 1 terabyte HD – lots of great features – top of the gaming computers reviews say. Great red back-light under the keys and I have a year’s Adobe Creative Cloud membership – every product they have now on my desktop so I can edit more of my boring YouTube clips and my thousands of webpages and soon too many apps that no-one will want. I am hoping I can continue with my subscription in China using my VPN but I am concerned I will not be able to as Adobe just gives the finger to China. But to get back to speaking to objects. When I get back to China I am just going to flat-out tell my three-year-old laptop that it has been replaced by something younger, faster and better looking and that I am in love with my new computer and it is going off to an orphanage where some kid will change the English keyboard to Chinese then probably drop it. Why beat around the bush? Of course some people would apologize to the  bush before beating around it.

To change the objects topic for a moment – our first stop was the outlet malls and no amount of jet lag can stop such meaningful events. When my son Sacha and his girlfriend, Georgia, visited us a few years ago I collected them from JFK – they had flown Melbourne – Bangkok – NYC with no sleep and lots of free alcohol but before we went to our home in Jersey City we went to this outlet mall just like Narda and I did last night. We have the rest of our life to sleep but a sale only lasts for so long.

Our rental car was great and fancier than our previous old Honda we had three-years ago when we lived in the States. No we did not talk to it; well I didn’t – Narda a bit of a conversation with it. The car did not start with a key but with a button which was fine and even though we were jet lagged we decided to go out past the Newark Airport to the docks so I could get some photos and video as the sun set. I drove the first long ways where we stopped to take photos:

Narda had the second shot at driving and the car would not start. She kept pushing the button and nothing happened. Of course we got into some kind of laughing fit that two old people naturally would when they discovered the car they were driving would not start and there was no one anywhere near as it was Sunday evening on the Jersey City docks. Narda pleaded with the car to start – I am not so polite when it comes to objects not working and I would just well have dropped a match into the petrol tank and proclaimed that the bloody car was a piece of junk and no longer worked. After many long moments of discussion with the car – Narda in her best elementary-teacher voice trying to get the stupid thing to function – she realized that when she put her foot on the brake then pushed the button it started. I am only telling this story so that we can look it up on my blog the next time we get a car without a key that will not work. Then Narda got us hopelessly lost in some dangerous-looking hood in Newark which recently was labeled the murder capital of the States. For some reason the GPS got left back at our hotel – probably for acting so prissy in telling us how to get to places; and no it was not me that took it out of the car and put it back in a suitcase – but as I am not one to lay blame I will not.

What I love about Jersey City is its competitive manner she takes to out-pollute the world more than Beijing. Here is one of their picturesque evening sketches: 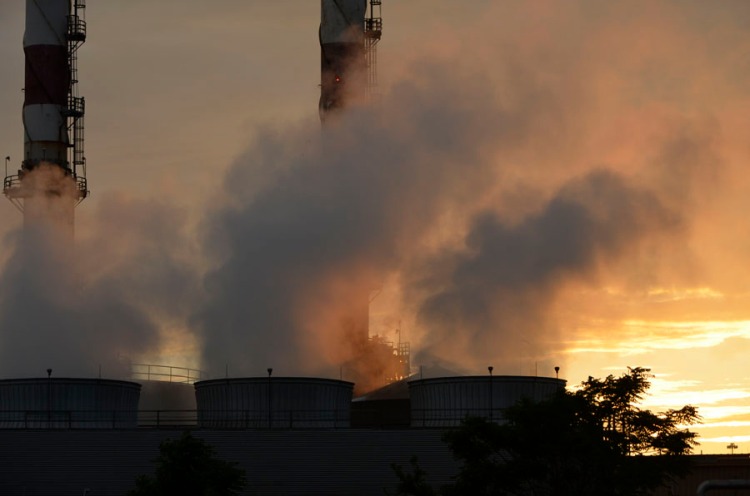 There are so many smells in this area from sicking sulphate odors to various food smells – a lot of imitation foods and flavours are created in Jersey City – really, we looked it up on the Internet. If you want your pork to taste like apples or your perfume to smell like muskrats this is the place to find it.

We were excited about eating at ihop where breakfast is a lot more than rice and more rice covered with MSG and other stuff, maybe even from Jersey City, that is served for breakfast in restaurants in China. 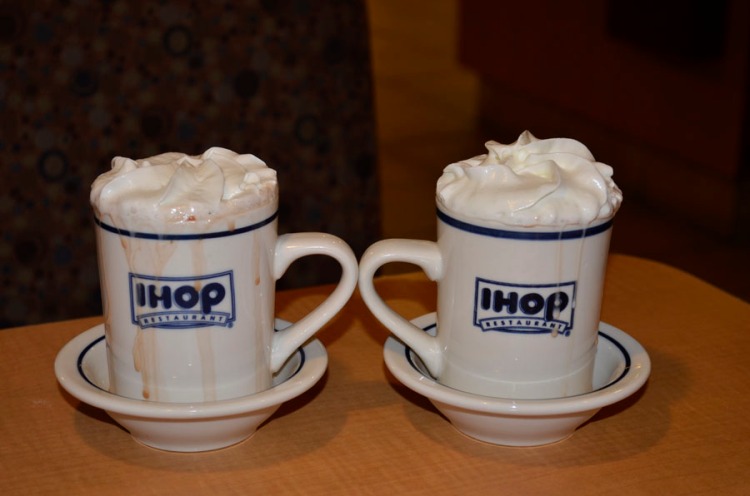 We visited our tenant who has been renting for the past year our three story row house in Jersey City, who happily is taking another year, saving us the realtor fee of finding someone new. Nothing ironic about it but our tenant is from China; he and his wife and two year old have made quite the messy house for us. Their kid has taken over the house and the place was an absolute pig stye. It wasn’t just the wall-to-wall toys but just the general mess. And that was just the lounge, he was not keen on showing us upstairs or downstairs though as the landlords we should have asked to see. There is no escaping China for us. We even had a couple from China looking at purchasing our house in Australia but we have taken it off the market so there was no further dealings. Maybe it is my tofu diet of the past 40 years that links me with Asia; see http://tofu.neuage.us but whatever it is there is no escape. I am sure our large Victorian in upstate New York will be just as messy; the couple there have three children, all three born since they have been renting. Our little Victorian next to it is rented by a couple who just had a child so whatever it is about us renters like to pump out the children in our homes. http://neuage.org/house 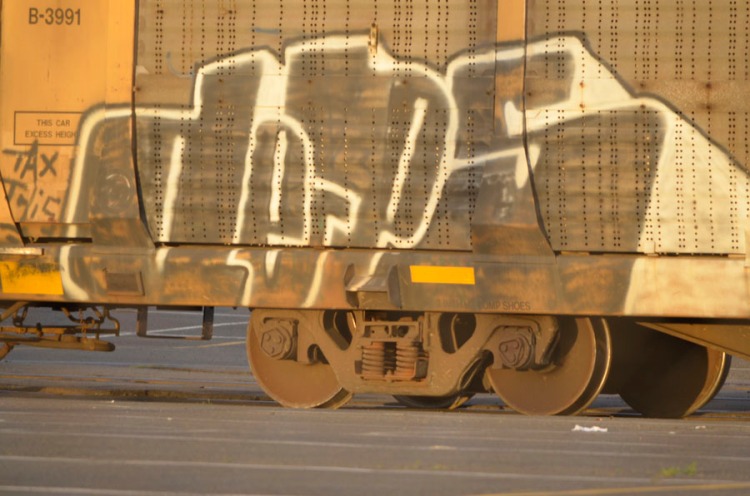 When we left NYC two years ago the new World-Centre building was about half of what it is now. In China they would have built the whole thing in six months. We will stomp around NYC for a few days next week before continuing with jet-lag games in Australia. I love NYC having done my hippie internship there between 1964 – 1969 before going west: California, Oregon, Hawaii then Australia for 22 years and back to New York 2002 – 2011 and now China 2011 – 2014. We have not been in the States for Fourth-of-July as we went to Australia every summer for our ten years in New York and with the 4th a week away we will try to be like other east-coast folks and train it to a beach on the Jersey Shore. 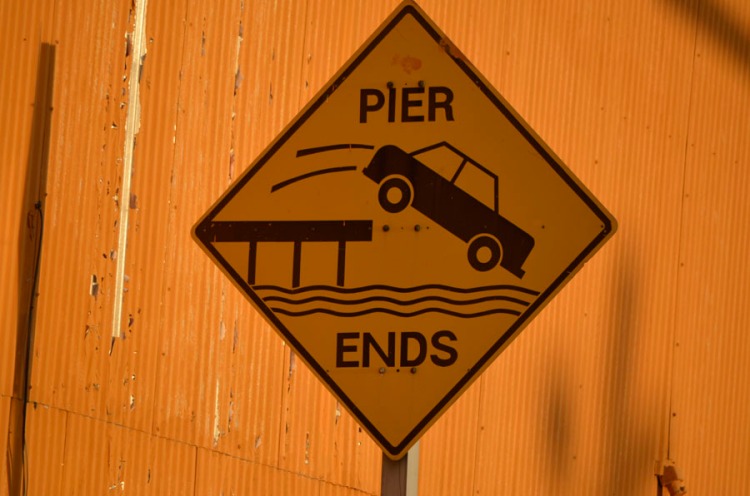 Interested in what comes next and not what was. Sole survivor from another place at another time with different outlooks on ‘the way it is' as I am mashing it together as a movie for my next lifetime to view this one so I can do it differently - hopefully on another planet or at least in another realm. For more see http://neuage.org
View all posts by Dr. Terrell Neuage »
« Lama Temple and beyond
suitcase wanderlust »