I do not recall having heard of the Piggly Wiggly chain of stores before last summer. Not sure why that is as I lived in the States for about 42 of my 65 years on this planet and I surely have wandered through the south where they have 600 stores in 17 states. And it is not because they just started popping up around the place. In fact their website says they have been “bringing home the bacon for millions of American families since 1916”. Perhaps it is because my vegetarian life has created a subliminal blind spot for sellers who are such whole-hearted braggers, sporting the bringing home the bacon rhetoric – though it could just as easily have been my birth in the year of the pig that placed them over with other things I have avoided as much as possible in life: restrictive humans, haircuts,  Pisces and most water-signed-people (having only Jupiter in Scorpio I did have some strange fixed fascinations in my youth with aspects of that sign – I use to find women with Venus and Mars in Scorpio a bit of a fascinating matrix to get involved in, as long as there was an escape clause – having five planets in Leo I am not afraid of the Scorpion sting but of the threat of water to put out my fire, I still avoid water sign people because of that; how they put the damper on us fire people is appalling… I am drifting here), and the clinging to material possessions such as umbrellas which this blog is actually about.

I horde stuff; a shed full in South Australia, a house full of stuff here in Northern China, stuff in an attic in our upstate New York house, and the shed next door to it, and our furniture in our house in Jersey City but that is not really an indicator of clinging to material possessions. It is really art artifacts that someday I hope to assemble in various arrays of sculpture and do gallery shows. That was a dream of mine during the 1960s, 70s, 80s, 90s and then I got married (again) and the idea of gallery shows was replaced by stored artifacts around the world that no doubt will end in the rubbish tip before I get to collect them all into one non-disposable spot.

On with the umbrella story…

Last summer we were driving around the south. We left Atlanta with Narda’s son’s car headed to my old stomping grounds of New Orleans. I had wanted to take Narda there for the whole decade we were living in New York but we ended up making little trips to Europe, Asia and the yearly hops over to Australia, leaving no time or money to explore the States. Somewhere in the south: Georgia, Mississippi, Arkansas or maybe we were in Alabama or Louisiana but somewhere down there we were in a small town lost on a country road and there was this big Piggly Wiggly grocery store. Narda saw it as quite funny, the born-in-the-year-of-the-pig part of my over active reptilian brain was offended but with no other shops in site and the last temperature reading we saw being 102 Fahrenheit ( Celsius = 38.88) the thought of something from a fridge was becoming overpowering. But getting a cold drink was not enough. At the checkout were umbrellas with the Piggly Wiggly emblem on them so of course I had to have one.

The umbrella got buried for a couple of weeks in the boot of the car as we drove around and we wondered how we would get it back to China. And not just back to China, but to Australia too as we were going there for a few weeks first. Narda wanted to bring back a curtain rod too because she could not find one in Dalian that was long enough to span two large windows in our lounge so she could hang some over-priced hand-sewed laced curtains we had bought in Belgium – yes Belgium lace, a few years ago. She found the curtain rod she wanted in one of those southern states and she taped it together with the umbrella that somehow magically would find its way back to Campus Village here in Northern China via Australia – and of course flying out of Atlanta, NYC, and all the stops between like Melbourne and Adelaide and Guangzhou in China.

First hiccup…. We were driving on a four-lane freeway heading north. Narda was driving and I was playing with my new Nikon camera when there was a big bump and Narda said ‘he hit me’ and at about 70 miles an hour we were going across a couple of lanes of freeway sideways and fortunately for this story to be told there were concrete blocks dividing us from traffic going the other way and we smashed into them sideways. Another few feet and we would have rolled. Of course Narda being Narda managed to restart the car to chase this huge truck that had hit us thinking he would get away. The back end of the car was dragging and we had flat tires. I was as much in shock from Narda restarting the engine and us going forward as I was from spinning across a few lanes of freeway. The truck did stop which was good because so did our car. Narda said afterwards she was waiting for the pain to hit her when we started spinning and I was waiting to hear the crashing of glass. I had been in three major car crashes before and that memory stays. There was no crashing of glass, the air bags did not open, and we did not get hurt but the car was totaled. We stood alongside the road in 104 degree heat – that is the absolute truth – the truck driver rang for the police – he took full responsibility, saying he did not see us when he switched lanes. Narda often says people don’t see her because people don’t see women past 50, but this was a whole bloody car he didn’t see. As we stood alongside the concrete barriers traffic passed by with almost no space between cars at high speeds. It was quite amazing no one hit us as we crossed lanes; there was just this few seconds let up in traffic when we decided to go for a bit of a spin.

Here is a photo of Narda under our Piggly Wiggly umbrella with a state trooper.

I wish I had had presence of mind to tell Narda to turn the umbrella so as to show the Piggly Wiggly figures but who thinks of these things at a moment like this?

We told Narda’s son we put a bit of a ding in his car – impossible to repair – was the verdict, rented a bright red car so we could be seen and I drove about ten hours straight back to Atlanta. Narda was still in shock, I did not want to stop for a day and besides we had about two days left before our flight to Australia. The truck company was really good and bought the car at a really good price and took care of our rental and on we went.

There was not any problem with the airlines; they just put the umbrella/curtain rod in with checked luggage. In Melbourne we took a domestic flight to Adelaide and again no problem.

Here I am in Adelaide with my Piggly Wiggly umbrella in Rundle Mall with my favourite sculptures – pigs of course. 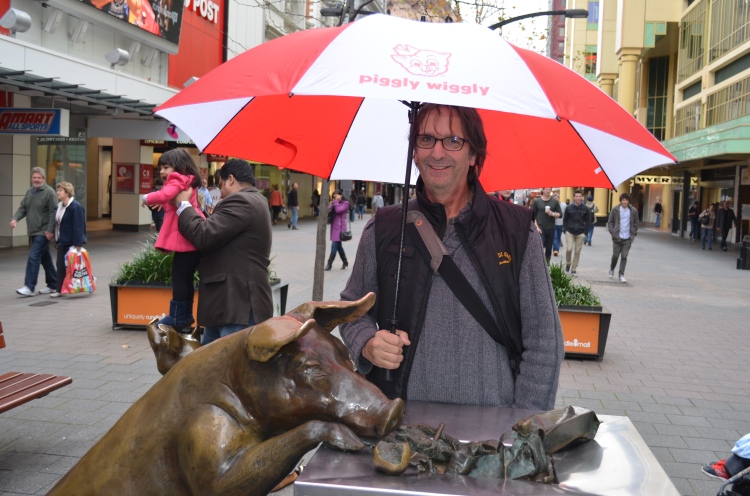 So we tape up the umbrella with the curtain rod to hold our Belgium laced curtains and checked them into the flight to Melbourne. In Melbourne I visit my son, Sacha, for a couple of days, and Narda and I check our umbrella with the curtain rod into baggage. There was our name in large letters as well as our Chinese address and phone number. No problems everyone is happy. We fly out at 10 pm as is normal and arrive in Guanzhou about 8 am the next morning, switch to the domestic to Dalian. Our baggage has been check through from Melbourne to Dalian so life is good.

We get to Dalian Airport late in the evening and wait for baggage. The suitcases come along just fine. Jack, our driver, is waiting for us as usual which is so great after a long flight. We wait and wait but no umbrella and curtain rod. Narda finds someone with a handful and a half of English. We show our baggage claim for our parcel. They ring Melbourne and sure enough it left there and it was even traced to Guanzhou but then it stopped. They said to ring the next day. We did. Day after day for a couple of weeks until finally they said they would give us money. I think we got about $50 US maybe less but it did not come close to paying for the umbrella. It only costs seven dollars or so in real terms at the Piggly Wiggly store but what we had gone through no money could have paid for it.

So that is my Piggly Wiggly story. If I ever get back to one of their stores I may get another one but it won’t be the same. It looks as if we will be in Atlanta in six months, so perhaps I will get another one and this time take it as carry-on luggage.

I am not sure if I fully understand the differences between hording, cherished possessions with attachments, and material things that are filling spaces of ours around the world. What looks like junk to others, i.e. my wife, has special meaning to me. And I am sure if the Piggly Wiggly umbrella had survived the trip and not been lost once it hit China we would use it on rainy days and remember standing in the very hot sun alongside a freeway after an accident that surely we should have come to grief in but didn’t.

Interested in what comes next and not what was. Sole survivor from another place at another time with different outlooks on ‘the way it is' as I am mashing it together as a movie for my next lifetime to view this one so I can do it differently - hopefully on another planet or at least in another realm. For more see http://neuage.org
View all posts by Dr. Terrell Neuage »
« Those were the days….
A Chinese miracle »