The first rainy day or actually all night previous but not to worry the rain did clear on Sunday morning with just a mist over Sapa and the one place we had not been to yet was the nearest village to Sapa, Cat Cat. Yes, that is its name. The H’Mong ethnic group tribal folks fill the area before, during and after.

Cat Cat is walking distance but the walk at the moment has a lot left to be a proper walk of any hue. The first kilometer there basically is no road where there was once a road or where there will be a road; it is difficult to figure which. There was a lot of mud – and jumping from stone to stone and wonderment whether we were going to be cactus before reaching the actual village. 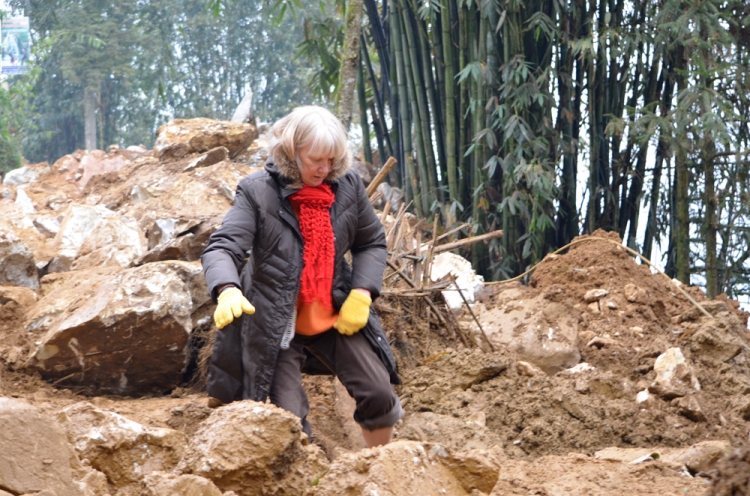 There was a dude that seemed quite anxious with a megaphone thingy and we just thought he was trying to help us from slipping into the endless river of mud until he got us past the area and down part of the hill then there was yelling into his megaphone thingy and an explosion and a section of the hill moved with rocks and smoke and us sort of out of the way. 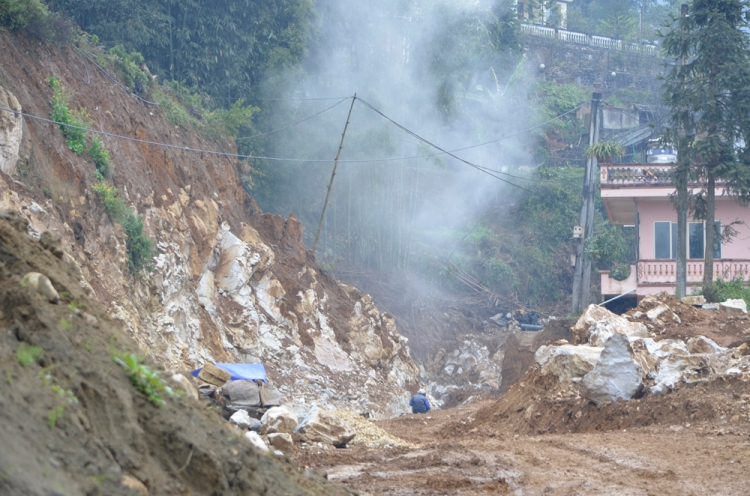 Cat Cat is similar to other villages in that everyone and their child is trying to sell their trinkets and weavings. All the young women seem to have babies on their back as we have seen the last few days and I have shown in previous posts. Most of these folks get married around 15 years of age and have two babies by 18; except, for Vivian, the guide we had yesterday – see yesterday’s blog, who has no intention to get married until after doing a university degree… good luck girl.

What is the most different about Cat Cat is the environment… it is very mountainous whereas the other villages were hilly but open with all their rice fields. Cat Cat; yes, I enjoy saying that, is like Aspin, Colorado or any mountain forest place.

The main attraction for us was the waterfall…

It took us an hour to get to it and that was our day. We had already made arrangements with some hustlers at the top to collect us at the bottom to save our weary asses from having to climb back to the top.

The owner of our hotel told us not to go to Cat Cat because it was too touristy but we reckon it was because unlike the other two days when he sold us tours Cat Cat is too close to Sapa to have a tour to. We did not see any tourists along the way probably because it had rained all night and no one was stupid enough to slip around in the mud and go down the dangerous trails… oh wait! We did. It was a great trip. 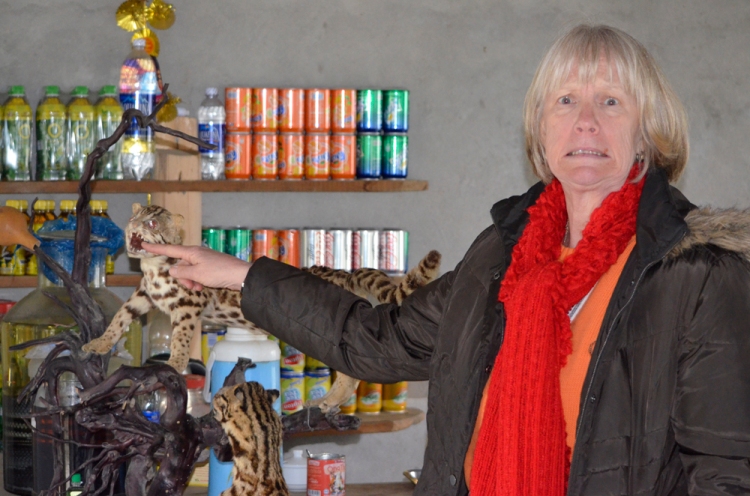 To save from writing another blog before getting back to Campus Village at Dalian American International School in two days I will jump to now which is New Years Day and we are back in Hanoi.

The Hanoi Tourist train back was a lot better as the mattress on the bed was quite comfortable unlike going to Sapa when it was so thin and hard I had bed sores by morning. I still did not get get any sleep because it was such a loud and jumpy train.  We paid for an extra night at our hotel because we got into Hanoi at five am pretty much the worse for wear. After a couple of hours of sleep we were out and about. The next day, which is today, New Year’s Day we went to Ho Chi Minh’s Mausoleum. It is pretty ghoulish seeing the dude laying there. I wanted to shake him and say something witty but there are so many guards and they look quite serious and push us forward so we can’t linger that I did not have a chance.

Interested in what comes next and not what was. Sole survivor from another place at another time with different outlooks on ‘the way it is' as I am mashing it together as a movie for my next lifetime to view this one so I can do it differently - hopefully on another planet or at least in another realm. For more see http://neuage.org
View all posts by Dr. Terrell Neuage »
« Lao Chai and Ta Van Village, Sa Pa, Vietnam
china again »