We said we wanted an easier walk today from yesterday’s trek up and down the local hills (mountains to my legs) through the rice paddies of Lao Chai and Ta Van Village. We hiked with the Henderson, from Liverpool, who we met and trekked with yesterday, at breakfast and we all decided to have another go and village hopping. They are on the way to stay with their daughter who has started a language school in Siem Reap, Cambodia, using her own money.

So we went firstly to Ta Phin village about an hour’s drive and two hour walk from Sapa, the little hillside village located in midst of the Hoang Lien Mountains. Several tribes live peacefully here: the Kinh, Red Dao and Black Hmong people. After getting past the overnight ‘sleeper’ (we didn’t sleep due to a hard mat and a loud rattling old train) and the hour winding climb to the town the journey of exploration is fantastic. 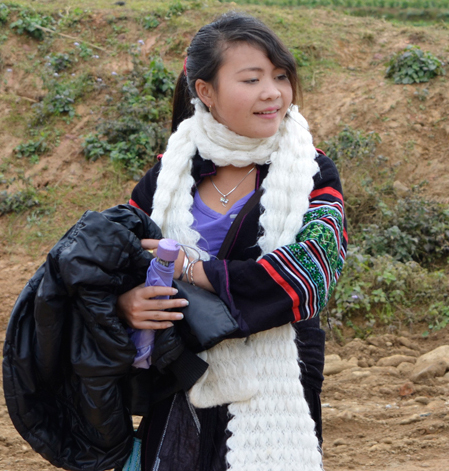 Our guide was an 18 year from the Black H’mong people (they wear black clothing). We said to her at the start that we did not want to buy stuff because the day before we were followed and hassled so much – and we did buy a lot of stuff yesterday – we just wanted to trek and be left alone. She said whatever to everyone that came at us and we had a great day of walking, talking and of course climbing up and down so much.

I took a lot of photos of children, something I rarely do as in some places people get really upset. When we were in Guatemala we were warned not to take photos of children because they get kidnapped and sold to Americans; we could have gotten beaten, killed or worse – they would have taken our camera. But here no one seemed to mind. I have posted some in an album in Facebook and Google+ and in my Flickr account in this set http://www.flickr.com/photos/neuage/sets/72157632393552028/ and I will have more in my webpage for this trip when I get home to Dalian China next week @ http://neuage.us/2012/Vietnam

Our guide, perhaps Vivvie – that is what we called her, which was close to what we think she said her name was, and she was OK with that was really good at answering our so many questions. Her English was quite good and she humoured our lame humour.

On Saturday nights in Sa Pa they have the ‘love market’. We kidded her about going tonight to it and she said ‘but no one wants me’. We of course said that was not true and when we passed some young male who looked at her we would say ‘maybe you should meet him at the love market’ and she would laugh and say no. Actually a lot of people in her tribe get married through arranged marriages and she is planned on going to Hanoi to university next year to start a teaching degree (gosh darn who in their right mind would want to do such a thing?) and come back and teach in her local village.

Here is a little about the Sa Pa love market that I borrowed and stole and amended from the world wide web; “Sa pa is famed for its “Love Market” – sort of a cross between a peacock mating ritual, a Middle Eastern arms bazaar, an Amish square dance, a bad Pavarotti concert and Bangkok’s Patpong (except here the people wear clothes). On Saturday nights, Red Dao hill tribe youths of both sexes congregate in a weekly courting rite, singing tribal versions of Loretta Lynn love songs to woo the opposite sex. The songs are highly personalized and boast of the composer’s physical attributes, domestic abilities and strong work ethic. While Dao women are indeed highly industrious, the men, it seems, prefer to spend most of their time drinking, smoking opium or sleeping, only occasionally slapping the rump of a lethargic bovine moving more slowly than they are. Few of their songs, though, are about drinking, smoking opium, sleeping or slapping rumps.” Lifted from http://www.sapatrain.com/local_market_sapa_laocai_vietnam.html

We did go through the market and saw much carrying-on Saturday night – with a group of males playing instruments and dancing in the church square, see photo above. 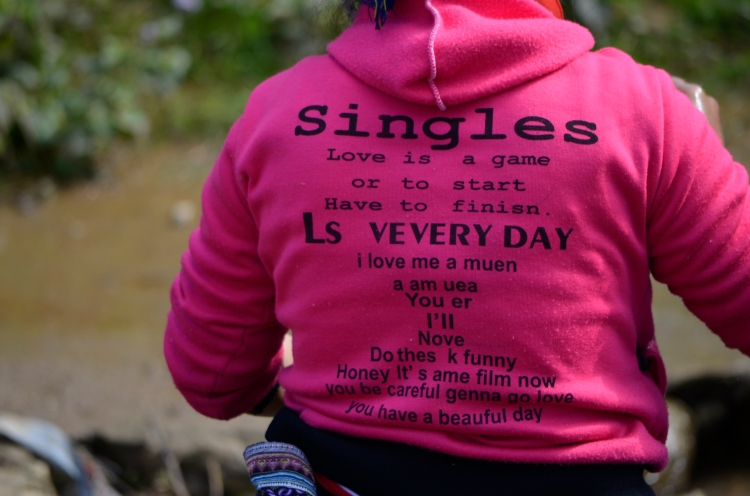 I asked Vivvie lots of questions – I don’t remember many at the moment but some were:

“Are there police/law-enforcement people in your village?” She said there wasn’t and the village didn’t need them. Having lived in the States for 40-plus years and Australia some 22 years and now China it is difficult thinking that a society could exist without law enforcement. What is wrong with a village where people do the right thing? Surely they should have automatic rapid-firing machine guns like they do in the States available to everyone. Surely there are people who murder, rape, steal and generally misbehave. I think all the villagers should go live in New York City or any city in the States for a year to learn how to live with other humans. She said she was a Buddhist, of course that explains it – one of those hippy-like religions where people respect each other and don’t kill animals for food or each other for sport. Those tripped out belief systems where people care for one another and work together. No wonder the Yanks bombed Hanoi and Vivvie said they bombed Sa Pa too – we cannot have people running around like this who respect one another and who look after their environment and who are not materialistic wanting more and more. Can you imagine being happy living in a house like this? 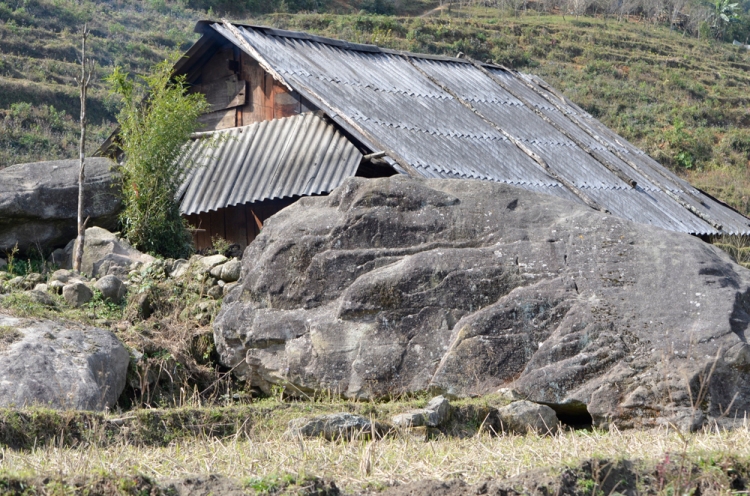 Really, look how stressed out these kids look who are not playing on their iPhones or laptops 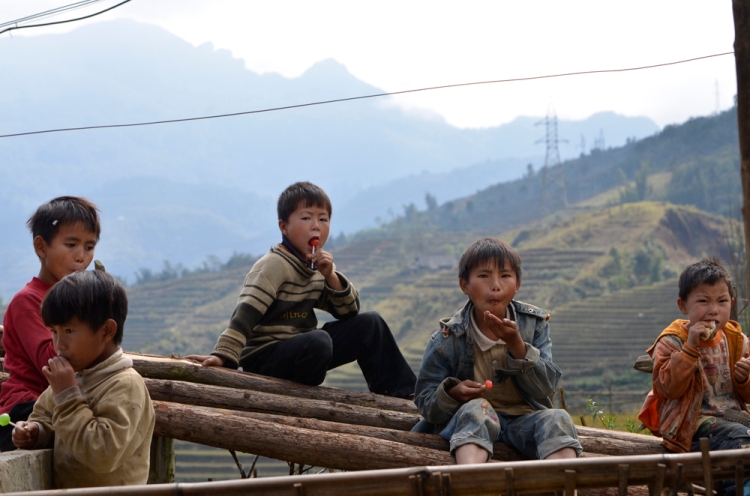 Vivvie said there people have been in this area for about 1500 years doing pretty much the same stuff. What has changed in the villages, or most of them, is that they have electricity and television but most people do not watch and they are too busy living life to stay inside and spend time on the Internet and watching TV. Tourism is changing life in that people have money but she did not say much about what they do extra in the past few years with the influx of Westerners. She said she thought she would get paid ten-dollars for today’s tour – which was about five hours with us. The Hendersons and we each gave her five bucks which equals her day’s salary. She refused the money but we insisted.

She said that when a woman got married she had to live with the husband in his village. There is intermarriage between villages but it is the husband’s village that is home. She said she would not get married until after her uni but at 18 years old and not having lived in a city I wonder how much of that will remain. She said when people do leave the village they almost all come back.  Even though she seemed quite liberated she said most definitely she would live with her husband’s tribe if she married someone from another village.

There are a lot of languages but I think about six main ones in this area and they do not understand other languages but they all learn Vietnamese and now English. So they communicate with each other.

One thing that is so different from our glorious Western ways is that people barter and help each other out in emergency no wonder America was out bombing them and the communists hated them. There seems to be a lot of tension between the communists and the H’mong people though I think it is the ones in Laos that have had the most trouble according to the Internet.

Last year there was snow for the first time in memory or some-such-time-period and a lot of water buffalo died. They are expensive and a primary part of the life in the villages. The people have gotten together to help each other out giving rice and etc.

As usual everyone seems so short… 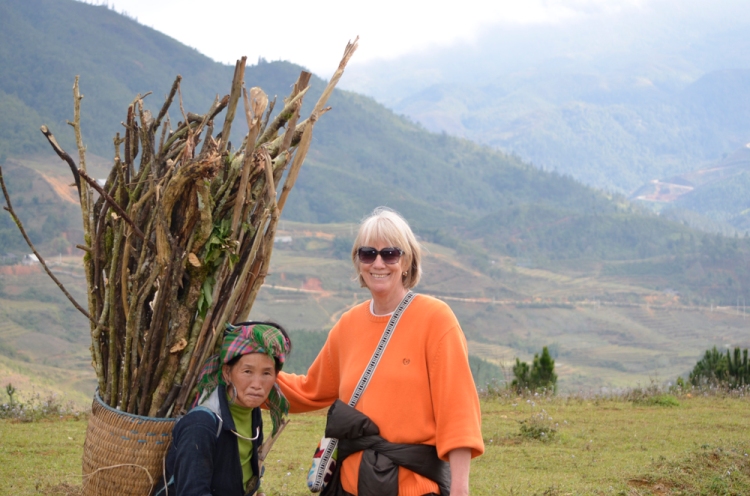 Well off to Hanoi and another overnight train.

I am sure I will write more about our visit to Sa Pa but this is all for today.

Interested in what comes next and not what was. Sole survivor from another place at another time with different outlooks on ‘the way it is' as I am mashing it together as a movie for my next lifetime to view this one so I can do it differently - hopefully on another planet or at least in another realm. For more see http://neuage.org
View all posts by Dr. Terrell Neuage »
« Lao Chai Village, Sa Pa, Vietnam
Cat Cat, Sa Pa Vietnam »