Friday morning 6 AM waking up saying to Narda maybe we should stay in Dalian for the weekend; get away from school and campus village – take a break, stay someplace nice. Ten minutes later she has booked into the (Best Western Premier) Dalian Harbour View Hotel; 2 Gangwan Street, Zhonshan District along the port and across from the Dalian Passenger Terminal.

It has been a good though as usual an over-the-top busy week. In my little world I have been teeing people up for my broadcast journalism students to interview. Next couple of weeks we are focusing on interviewing and I wanted to steer clear of them interviewing one another or teachers as is usually the model. Having done my Ph.D. thesis ‘Conversational Analysis of Chatroom “talk”’ – (http://neuage.org/All.htm) and having the bloody 550 page book (165,000 words) sitting in an obvious place in my room for students to say ”wow, you wrote this?” it seems only fitting that I continue with online communication. Person-to-person is always so messy – one feels like thumping the other person if they are not active listeners – well they are active listeners in that they interrupt at every chance to change the conversation to about themselves – oh wait, this is interviewing they are supposed to do that. Nevertheless, we are interviewing only via Skype. Last month we had an hour Skyping session with Canyon H.S. School in Bhopal, India as part of the ISA plan through the British Council School’s team “World Class” (and yes, I have an ever evolving webpage on these projects at http://edu.neuage.us/blogs/schools.html).

Back to this week, so I am gathering people to interview: Brandan – a Silicon Valley programmer with Expedia (his parents work at our school so that was an in, and I make fun of his parents to him which gives me an even more in factor), four of our ex-teachers; two in Brazil – they met at our little school, Dalian American International School, got married then pissed off to Brazil. My students are interviewing them Monday morning. Two others who met at our school last year, then got married now in Qatar – hopefully we have them Skyping with us next week; and a woman who is writing a choral piece for our school to perform, living in the State of Washington, will be interviewed by my student and we will be live-streaming rehearsals and the final performance. I have said to the woman we can do the live-streaming but being in China; last Tuesday we did not have electricity for the day so teaching computing was fun. I had them doing storyboarding. With the school in India we had times where the Internet went down but we got back on enough to have done enough work on our project which was about festivals in our two countries to complete our tasks.

I am trying to get my son in Melbourne to come on board with a Skype interview but he has not responded since I asked him last week. He works with asylum seekers (boat people) coming illegally into Australia and he records and performs hip hop acts so there are two interviews there. He spoke about hip hop in Australia to high school students earlier this year when he visited and I was/am hoping there would be a follow on to that.

As well as driving myself nuts with organizing too much stuff I have set up a 4th and 5th grade project for after school starting late November with N.H.Goel World School situated in the city of Raipur the capital city of Chhattisgarh and a Skype project to do with afterschool high school students, probably with a school in the States. The project I am doing with afterschool  4th and 5th graders I am doing with Narda so we will involving music into the mix and both the coordinator at the N. H. Goel World School and us are quite excited about this. The high school project I am doing with the high school music teacher so that will be interesting too as he wants to try and create a musical piece with two schools at once.

So regardless of how busy we were this past week; and I am also starting our laptop program tomorrow, Monday, and have been doing a lot of work putting that together plus of course teaching my classes, it was time to get out of town.

We took the school’s shopping bus into Dalian, stopped at Metro to get grazing food figuring we would sit in our room and watch the forecasted storm pass by, went to Ikea for lunch and took a taxi to the Best Western Premier Dalian Harbour View Hotel at 2 Gangwan Street in the Zhonshan District across from the Dalian Passenger Terminal and Dalian Port, where we found ourselves in a fairly good place. We booked a suite; small lounge and large bedroom. The view was great looking down at the incoming ferries. There were four that came in on ‘our watch’ including the one we took back from Yantai last month; http://neuage.us/BLOGS/21-ferry.htm.

As we so often do, we did not end up eating all the food we bought instead dragged it back home the following day. We went up to the revolving restaurant just to have a sticky beak, check out the food and view. The revolving restaurant only revolves between 6 and 8 pm so we said we would be back at six; by now it was only 3 pm and raining too hard outside to go exploring so we did what normal hard working people do on a day off, we went back to our room and took a nap for an hour. At six pm we were all smiley at the revolving restaurant with camera, lens, tripod, and video in hand. We thought to save money and I was ordering a vegetarian pizza and Narda was eyeing something dead to eat but the buffet was looking and smelling good and tired of our cheapskate ways (well the hotel was not cheap, being a five star, ‘Best Western’ chain hotel, which in our world means soft beds as most hotels in China one may as well as sleep on the floor the beds are so bad. I think they just have box springs and no mattress usually, maybe a throw-back on Chairman Mao who believed life was meant to be hard) we thought spending 135 Yuan ($21.46 US, $20.66 Australian, 1,480.87 Syrian Pound – OK that is just getting silly) was worth it for the view and the food was good. Sometimes we would eat at the all you can eat Chinese restaurant in Clifton Park, New York a few years ago and then it was only about $11 and actually I liked the food there better. (As there are 7 Chinese buffet places now in Clifton Park listed on Google I do not know which one we use to go to back when there was only one a few years ago; maybe there are more Chinese in upstate NY now than in Dalian – damn) We like the Chinese buffet in Australia and in the States better than the ones here. I think they put too much MSG in everything and I get heartburn. Nevertheless the view was good and in the hour that we stuffed ourselves we went all the way around; beer and juice was free making the revolving restaurant revolve all the more. My photos did not come out well because of the reflections on the window but we did get some from our room and I put it both on youtbue at http://youtu.be/mfIh5gvLq9A and on my webpage for this particular blog – http://neuage.us/BLOGS/25-Dalian-Harbour-View-Hotel.html

A view from our hotel.

We went for a walk, in the early morning rain; 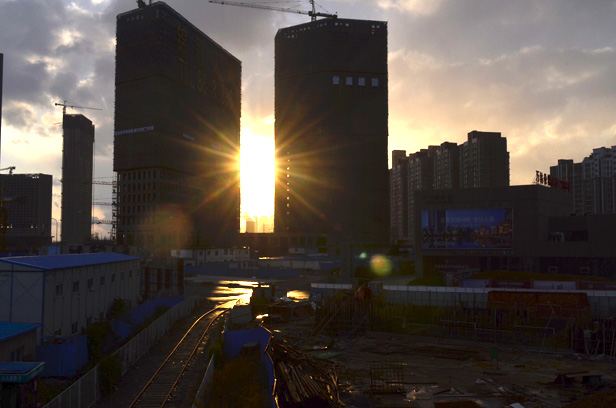 All over China there are these homes for the workers, they are filled with bunk beds and from having peeked into many windows at constructions sites they look quite un-inviting as a place to live. 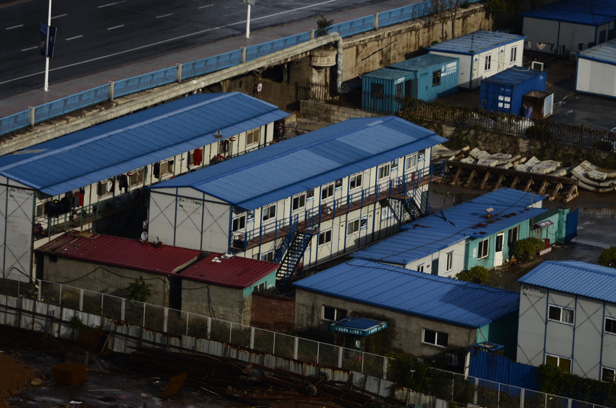 Narda loves tug boats – she had relatives in The Netherlands who were tug boat drivers and she says it is in her blood. When we lived in upstate New York we use to go to the tugboat regalia in Watervliet, New York. There would be lots of tugboats, most come up the Hudson River from NYC.

Another view from our window looking toward the ship building area. 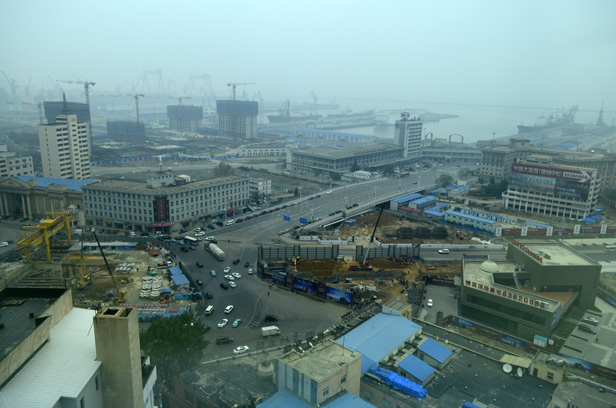 The ferry on the lower right arrived in the morning from South Korea, a 16 hour trip – it looks quite rusty to me.

And today, Sunday, we checked out at noon, we had already called Jack to come and get us; Jack is our driver, but we call all the drivers Jack, and the one who collected us was not the real-Jack but we were happy to see him and called him Jack and even with stopping at Longshan for groceries on the way home we were home in one-hour.

Interested in what comes next and not what was. Sole survivor from another place at another time with different outlooks on ‘the way it is' as I am mashing it together as a movie for my next lifetime to view this one so I can do it differently - hopefully on another planet or at least in another realm. For more see http://neuage.org
View all posts by Dr. Terrell Neuage »
« Jinshitan Storming
Hoi An, Vietnam »