Lama Temple and beyond

Never kept track of flights. Life is a flight. In-flight again. I don’t think I have done Air Canada before. Up here listening to Janis Joplin, OK I have done that before. She is my flight attendant. As one who rarely listens to music except when I travel I stick to what I know to hedge against the approaching unknown. I listen to Dylan, Joplin, Cream… Stuff like that. I almost got knocked over by Janis once in San Francisco in 1969, she was speeding along in her Porsche and I was crossing the street in one of those altered-alternative states people in the 1960’s got into. My one almost claim to fame so now when I fly I listen to her because she can no longer can run me down.

It is a bit of a different trip. Narda and I left Beijing at the same time, almost. Fifteen minutes apart – meeting in Vancouver fifteen minutes apart, racing through the night for eleven hours.   We made a slight error when booking  – damn we got on different airlines. We do connect in Vancouver and fly on the same plane on to New York City. We thought we were both doing United tickets – not that I was paying attention I was probably listening to Janis Joplin or trying to keep from getting run over by her to double check our flights.

We had a nice overnight in Beijing. We stayed in a Hutongs – one of those remaining bits of China that have not been knocked over to create another luxury apartment building that no one can afford to live in.

Photo from the roof of Candy Inn/Classic Courtyard

I think it was called Candy Inn; that was the user and password for Internet usage so little else matters. The hotel, more of almost a youth hostel, was in a very small lane. Everyone was friendly, though young. We usually stay at four or five star places which are comfortable but boring. This place was about a half a star with a small room with enough room for the bed but meals were good.

Before we knew that Candy Inn served good meals we went out in search of something ‘western’. After walking too many blocks past dozens if not hundreds of Chinese eateries and growing excessively exhausted and not even thinking of the “look we’re lost” but we are constantly lost so we did what we do best when we are lost we took the first bus that came along, a double decker bus where we quickly grabbed seats upstairs. Our policy is always that a bus with a seat is the bus we will take no matter where it is headed. Being seven pm and still very much on the right sight of light I captured fleeting moments with my zoom lens as pedestrian’s privacy found their ways into my next YouTube videos.  At some point we felt we had gone far enough and not that there is a downtown but it looked like some city centre so off we went looking for a western restaurant. Seeing a TGIF we entered one of those huge empty modern malls that get built then left all over China. Thank-God-it’s-Friday was on the top floor of the mall and as we rushed toward the entrance we were told it was not open yet and to come back on the 12th, probably the 12th of never.

After more blocks of malls and empty buildings Narda spotted a Hooters restaurant – about the last place a feminist wife would want to go to but she said that if I could get past the tits we could at least get western food. “Past the tits?” “Pass the tits” I’m a guy.

Then she said if there is a Hooters there would be other western places nearby and just when I was wondering what a Chinese Hooters would be like low and behold she saw The Den, a very western looking spot. The food was good, I got my vegetarian meal, a salad – good grief, what one puts up with, Narda ate some dead meat and we watched Hawthorn vs. West Coast on the Friday night ABC footy game of the week. (Well almost all of it we left just when Hawthorn drew within a kick of West End; to non-Australians footy is football, though not grid iron as played in the States, or football that is soccer elsewhere and West End is Perth and Hawthorn is in footy-mad Victoria; and still for those not knowing much about Australia, Melbourne is the big city in the state of Victoria. Ballarat and Geelong are other cities in Victoria).

We were so lost and far afield from Candy Inn’ (Narda has corrected me claiming it is ‘Classic Courtyard’- 31 Beixin Hutong Yonghegong Street, Dongcheng District, Dongcheng, 100007 Beijing, China) that we grabbed a cab back. Not sure why the sign in front says ‘Candy Inn’ – maybe it was a brothel during Chairman Mao’s time; giving the peasantry something to escape their cultural ruinations with.

There were so many people on the street. I suppose after a long brutal winter everyone is please for the warm air.  But the air! It was so polluted that we could barely breathe and I had a sore throat and could taste the grit. What will ever become of Beijing and so many other cities in China?

This morning we discovered the good food of where we stayed; Narda getting the European Breakfast and me the American “hold the meat” meal. I was taken by the nearby food shop and the ‘Magical Dumplings of the Immortal Emperor’ – I think I had something like that back in the 1960’s in San Francisco but it was closed.

the ‘Magical Dumplings of the Immortal Emperor’

We went to the Lama  Temple (Yonghe Lamasery “Harmony and Peace Palace Lamasery” and not really joining in but at least being sympathetic to whatever it was they were burning incense and asking various gods for we grabbed some photos to prove their devotion.

The Chinese are not really a law-abiding group of folks as below shows with their putting  incense where they were told not to.

It was raining most of the day but umbrellas have been a theme in the past of mine and I found some interesting reflections of folks reflecting on whatever it is, is they were reflecting on whilst burning their incense.

Narda as always stands out here she is the only one who forgot to bring any incense. 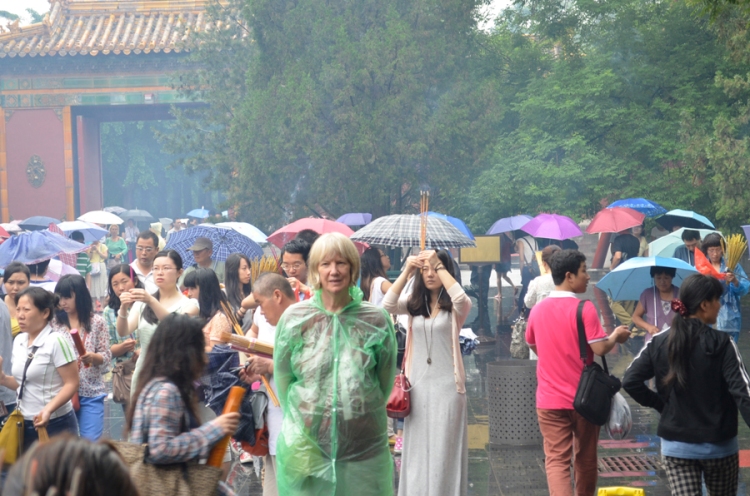 And that was China…

So here on another moment to Vancouver, I do what I can to be annoying – and I really did pre-order the vegetarian meal and there was none for me. So every few minutes they brought me food – starting with an apple and a pear, then cookies – well I don’t eat sugar do I? Then came a salad, then a big bag of great tasting mixed nuts and a bag of cranberries… I am doing well though neighboring passengers are looking at me as if I am just an attention seeking wanker. I was going to take a sleeping pill but they are in a bag I cannot get to. This is when my traveling companion of the past twelve years is so missed, she would have had all the crap I believe and some of which I actually do need all sorted out, probably in alphabetical harmony, too, and travel we do. We have been going to Australia about twice a year for more than a dozen years, usually from the States though these past couple of years from the States and China, and this year we may be going to Australia three times.

So not having sleeping pills I am watching movies and iPodding (perhaps I should say blogging on the iPod; I just looked up iPodding to see if there is one p or two and got this response from the Urban Dictionary; 1. “The act of illuminating the genitals with the use of ipod backlight during a 69.” 2. “Rubbing your nipple in a circular motion like you have an ipod in your shirt pocket”, good golly I am old and not up to-date) this blog and watching the movie ‘Stoker’ with Nicole Kidman. I would recommend the movie to anyone who is flying for close to a dozen hours without sleeping pills with a plane full of Canadians (vs. iPodding as the Urban Dictionary sees it). I do enjoy their accent, after Asia, it is a holiday to hear some form of a language that I sort of understand. Canadians sound quaint. I think the flight-attendants (except, of course, Janis Joplin) are from the same area in Canada as they all have that slow-long-drawn-out way of saying stuff.

Breakfast was good, lots of fruit, more food than the people around me. I wish I could show more appreciation but my only knowledge about Canadians is from South Park, which of course is the only show the Yanks put together that is informative. I have tried their other news shows: ‘Jersey Shores’, ‘desperate housewives’, Fox News…. They just do not give a feeling of investigative journalism that South Park provides. Unfortunately we do not get it at Campus Village @ Dalian American International School, though why I am not sure. Maybe China blocks it or maybe our TV provider does not provide it, giving us the third rate Fox News instead.

So I get to Vancouver and in my stupor I get sent to the interrogation area. Something about having two pieces of fruit in my possession. I explained that the airline did not get my vegetarian order and plied me with fruit for a dozen hours and that it was Air Canada so no doubt the fruit was from Canada to start with. She was a hard-nosed Yank, not one of those slow talking Cannucks that I had been getting used to hearing since freeing myself of Chinatown over there in China. She had one of those ‘I have heard it all before’ tones. In fear that I could be smuggling a backpack and camera bag full of apples and pears she had her lackey, clad in anal-probing gloves, take everything out of my bags. Obviously, finally, to her I really was innocently in possession of possible Chinese-toxin-bearing fruit and I was sent on my merry way.

Narda was waiting for me and she too had not slept. Now on our flight to… well that is the next blog.

driving lessons in Beijing – if the pollution does not get you the driving will.

Interested in what comes next and not what was. Sole survivor from another place at another time with different outlooks on ‘the way it is' as I am mashing it together as a movie for my next lifetime to view this one so I can do it differently - hopefully on another planet or at least in another realm. For more see http://neuage.org
View all posts by Dr. Terrell Neuage »
« DragonBoat Festivals, DiscoveryLand, B’days
our Pommie GPS »