After a couple of choking days in Beijing – it was much worse than times before – what a relief to see blue sky again.

Surely we would not have two flights canceled in the same trip. Surely it is only Delta that is unable to get us from place-to-place with our luggage happily going elsewhere. But no it is the nature of travel period. We use to fly around-the-world every year, did so for 12 years plus lots of flights between New York and Australia and we did not get any canceled flights. A couple of times luggage arrived at a different time than us but we got our compensations and life move forward, sometimes better dressed than when we left thanks to misplaced luggage and insurance. But this year is quite different. It started in February when our flight Dalian, China to Adelaide was canceled – I rabbited on about that in a previous blog-tale, ‘A Chinese Miracle’. That was important because Narda’s first grand-daughter was being Christened, not something that would happen in my family as I did not quite do all the society-rituals that most humans do as I blundered through life raising my sons, but it was important to Narda plus her son was turning 30 so being told our flight was canceled to Australia did not go well with her and we found ourselves on a different airline later that day and all went well.

In Atlanta last week at least we were at the end of the runway before being told our flight was not going to take us to Nirvana or any other such similar sunny summer spot. Stuff them! They took us back to the terminal and said perhaps the next day we could go but we thwarted them and got a flight that night to Albany, New York and left the other passengers floundering about to get hotel vouchers and a hope that the next day they would get to NYC. Not us we are too impatient, got-to-travel, it does not matter where, just take us some place. It is like when we are home in China (did I say home? Actually I suppose it is because 67 percent of our crap is there, the rest being scattered around New York, New Jersey and Adelaide, Australia – I always say Australia after Adelaide because no one has ever heard of it – check your wine bottle mate – that is if you drink good wine – it will be from near Adelaide); when we are in China, Golden Pebble Beach where 67 percent of our crap is – we take random buses, of course we do that wherever we go just to be on the move. Our only criteria is that there are two empty seats on the bus. Where it goes does not matter. 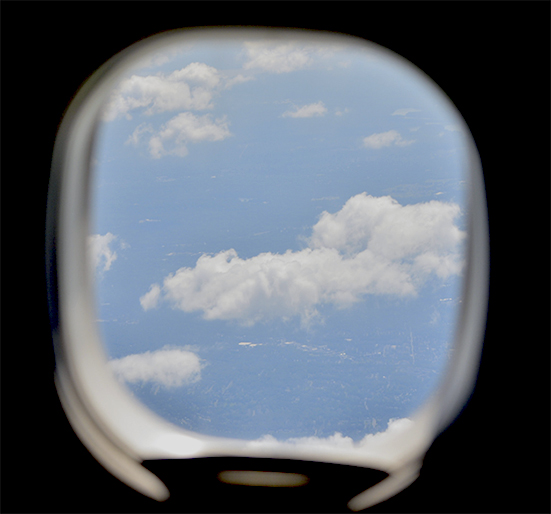 Yesterday we checked in, went through security, customs, immigration and then were told our flight was canceled. They gave us breakfast – in a restaurant that advertised cowboy bones, 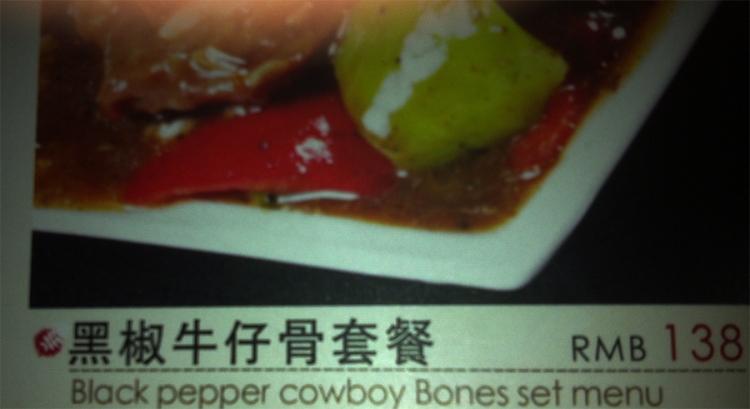 I suppose they were just making fun of vegetarians. We had a somewhat decent breakfast on the expense account of Malaysia.

Then we had to go back through immigration, where they stamped ‘delete’ on our entry stamp, back through customs, and back on the airport train to the baggage area to collect our stuff that thought it would go somewhere but instead came back to us. I know my suitcase has been flying about the place on its own lately and it looked at me with dismay as it did not get to go anywhere this time. I took firm possession of my wanderlust suitcase – written with photo included in a previous blog-tale ‘my wanderlust suitcase’ and we were clumped together into a bus headed for downtown. I took photos of Narda with my cell-phone but they did not come out very good and I was reluctant to drag out my Nikon to shoot; the shots being of Narda in the midst of a posse of Muslim women half her size and overdressed for the warm weather if you know what I mean. We have, or to be precise, she has, a word-warning for when I am being inappropriate – I can’t say what it is for some reason, but it is the name of a city, and she is going ‘Melbourne’, ‘Melbourne’ as I am making, what I think are funny, comments. I seem to hear that word a lot when we are out amongst people so if I am talking to you and Narda is saying ‘Melbourne’, ‘Melbourne’ it is either we are landing at Melbourne airport or we are off to visit my son, Sacha who lives in Melbourne or it is because I am saying stuff I should not be saying. Honestly I never think I am saying inappropriate stuff but I hear ‘Melbourne’, ‘Melbourne’ and stop saying whatever it is I am on about.

We get to Metro Park a rather OK place and we quickly get to the counter to get our room. With probably more than 200 passengers we have been moving through the masses with considerable ease. It was lunch time and the airline had given us vouchers for smorgasbord lunch as well as smorgasbord dinner. We were up at 4 am and by afternoon were ready for a day off. After a frantic visiting and travel difficulties in the States a day down was a good idea and for someone else to pay the bill always means we have more money to use on the important things of life, shopping.

What was difficult was that we were sort of left at the hotel, all a couple of hundred of us. None of the hotel staff knew if we were flying out the next morning or even how to get in touch with the airline. We were told by five pm a note would be slipped under our door. Well that did not happen and we expected it won’t so we were on the phone to Malaysian Airline in Malaysia as no one would pick up the phone in their offices in Beijing. The hotel was not keen on us making long distance phone calls but they were not familiar with the Narda verb (see earlier posts) and we were on the phone until we got a half- hearted nod (we could not see the nod but it felt like someone down there in Malaysia was nodding) that possibly we could be on the next morning flight which was already full and that possibly we could take the four PM flight which of course Narda let it be known was not possible.

At five AM, this morning, Tuesday, July 9, we got a room-service phone-call informing us to get our sorry asses down to the lobby in preparation for a six AM bus departure for the airport. Some time during the night they had slipped a note under the door informing us that we all had to go to the airport whether we were on the next flight or not.

Not to worry – they at least had box lunches for us with some bread like substance an egg which smelt strange so we tossed them and Narda went off to get us coffee which they said we had to pay for and Narda informed them we wanted coffee and that we were not going to pay for it and sure enough she returned with our coffee, free, of course, then she went back to get milk when I noticed there was none in the coffee. It is not that I am lazy, I do heaps in our relationship, but at the moment I was reading sports scores in the newspaper and as a male that is one of my roles in life.

To make this first part which is just getting to KL short, suffice it to say we got onto the bloody nine AM flight and we will be landing in half an hour so we will have a couple of days of either rest or adventure before going to Australia where Narda will busy herself with grandmother duties and I will have a play on my new computer; 16 gig RAM and all the latest stuff and the whole Adobe Creative Cloud software to explore.

Not that it matters but in a city the size of Beijing we were surprised to be staying at a hotel (we have stayed at Metro Park in Shanghai, a good chain of hotels for sure, but the hotel we had booked in the night before was onlyt a block away so in our couple of days in Beijing we did not go far. I suppose most people visiting Beijing would be somewhat more exploitative but we could not breathe the air and we have wandered about Beijing enough and it is not really our city, not like New York City is.

Overall we are happy with Malaysian Airlines, they did the right thing. We discovered they did a bit of a lie. They told everyone that the flight was canceled due to weather in Hong Kong but when we researched it the weather in Hong Kong was fine. A bloke we were speaking to at the Malaysian Airline desk in Malaysia said that there was mechanical problems with the craft and it was not flying. This was right after the crash in San Francisco with the same type of plane and we think that was related – they did an extra check on our plane and probably a few bolts were missing. Whatever the cause airlines tend to say weather related because then they get out of being responsible as it is an ‘Act-of-God’ .

Our first impression of Malaysia is really good. I probably should not say this but at the airport it was like being at a costume party – I have never been in a city that had so many different clothing styles. Going through customs and immigration was so quick. We have been so busy lately we did not check to see even if we needed a visa but they just asked what we were doing here and we said holiday and they said have a good time and we were on the way. Nothing like all the check points in China. The airport is good the people are friendly and we got a taxi to our hotel in downtown Kuala Lumpur and we got a room with a view on the 26th floor of a new modern place. See the Petronas Twin Towers in the distance – that will probably be our first visit today but as always we are up at five AM and no one else is. The second image is a view from our window at night. Wake up KL we have room in our shit case for more stuff.

It is Ramdim fasting time so it is limiting to where we can eat.

We have to use a VPN to use Facebook and Twitter and all the rest so must be social Western sites are blocked but the Internet is very fast probably faster than in the States and surely faster than China. Yesterday in Beijing to insert a photo into my blog took about an hour for each here it is just seconds. 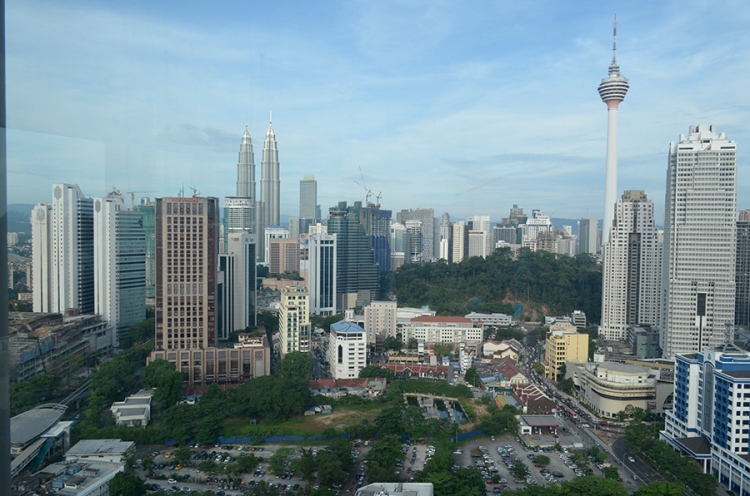 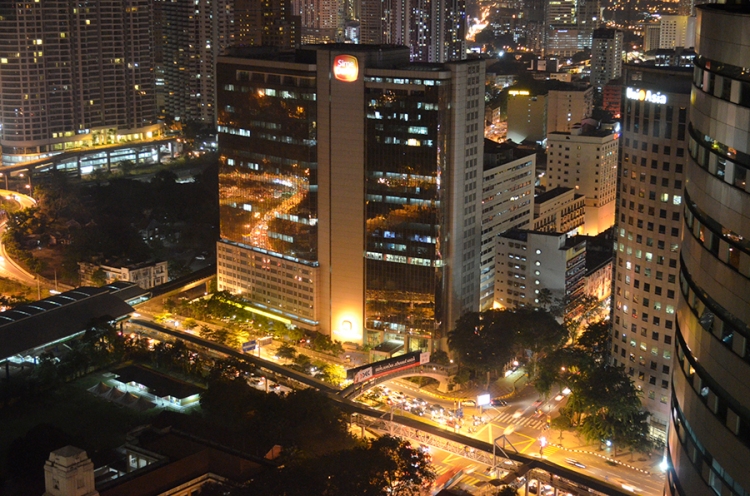 Interested in what comes next and not what was. Sole survivor from another place at another time with different outlooks on ‘the way it is' as I am mashing it together as a movie for my next lifetime to view this one so I can do it differently - hopefully on another planet or at least in another realm. For more see http://neuage.org
View all posts by Dr. Terrell Neuage »
« Last Days
Reason to believe »