photo album for this is at http://neuage.us/BLOGS/photos/

Last Sunday we changed our day around – I suppose if it was my classroom we could say it was the flipped classroom model but I am not going to equate a day of leisure with an academic day. Not that every day is anything but learning; life the classroom and all that crap, but a flipped something is not the same as a non-flipped something.

Now that we got that out of the way and yes I do sometimes do the flipped classroom approach when it is suitable which in China is not always possible because students cannot use youtube or participate in western social sites due to the great firewall of China.

Instead of going out in the afternoon; we tend to spend the morning on the Internet doing books, keeping up with family, and Facebook, and other schools – are they offering a better package for next year, is it more interesting than living in the part of China that is more Ikea than historic China; for example, Myanmar (Burma) really has our eye at the moment and of course who would not want to live in and teach in India?

I had my first Skype session with Canyon H.S. School in Bhopal, India doing an ISA (British Council  International School Awards) project “Festivals and Aborigines”  with my Broadcast Publication class last week. It took a bit of effort and time to understand each other, us their accent and them ours (I have Korean, Chinese, Trinidad, and American students), our Skype connection went down as well as the whole Internet a few times but overall it was really successful and students from both schools were really excited. I am starting a unit I am calling “Foreign Correspondent” with the longer term plan of having our students do a collaborative documentary which will really test our technology as well as my planning and implementation skills.

So we headed out on our bikes at 9 AM last Saturday; we were going to do the same today but already it is eleven AM, we are still in our pajamas, on-line, and I want to ride our bikes to the Jinshitan Port – which we have never been to and no doubt is just a small fishing port or kelp port, but I want to go nevertheless. But it is cold and windy outside so no doubt we will take the # 1 bus from the light rail station, if how I am reading the map is correct. Then again we may spend the day indoors which is not my ideal. Yesterday, Saturday, Narda went to an orphanage in Dalian City – all babies and the oldest I think was in the two year old range. She went with a group of teachers. Apparently it was all heart-wrenching. These are children that are left for whatever reason; the one baby policy of China or because they are deformed and etc. Teachers volunteer to go just to hold the babies and have a bit of play because they are stuck in their cribs all the time otherwise. We brought up the ideas of students visiting in our middle school assembly last week asking if any students would want to spend a Saturday morning at the orphanage – and I was extremely surprised when every single student in grades 6 – 8 stood up. My day yesterday was not so altruistic as I spent nine hours at school working on standard based lessons – something everyone at school is so opposed to, but again I am not talking about work now.

Near us is yet another huge apartment development, Boee Brilliant Villas Hill. We tromped in with cameras in hand and viewed the first smaller apartment that they were selling for 7 and a half million RMB, about one and a quarter million dollars US. See our video of this exploration at http://youtu.be/gQ0Noz1pF_c  Or other related blogs at http://neuage.us/BLOGS/

The outside is quite nice –

The child’s bedroom – no wonder they have only one child who could afford more?

We saw two apartments the one above on the right was 20 million RMB or about three-million US. Going along with the one child stuff of China it had a spa bath and little glass garden in the child’s room as well as two walk in closets and a study.The picture on the left above is the kid’s bath with spa and stone garden and on the right is the parent’s room – through the window they can see how us lowly teachers live in campus Village off next to the hills straight through the window.

We wandered on to the new city being built down the road – Xiaoyaowan (an earlier video I made of this is at http://www.youtube.com/watch?v=-drgVo45WWs&feature=share&list=UUzGrI_yggI56Gpp2ZyNQAXw) and drove along the three and four lane empty roads leading to huge holes which I suppose will be for a river they are putting in and bridges and skyscrapers. I made a clip of the day and put it on youtube at http://youtu.be/NyME0iqSMhs.

In the distance is the end of the bridge which is not built that will go over the new river.

Narda at the first part of a large bridge to be built over a river that will be put in soon?

The infrastructure is in place – large highways to large holes in the ground.

This is what is happening to the old village to make room for Xiaoyaowan.

The future mega city or a part of Dalian – who knows? 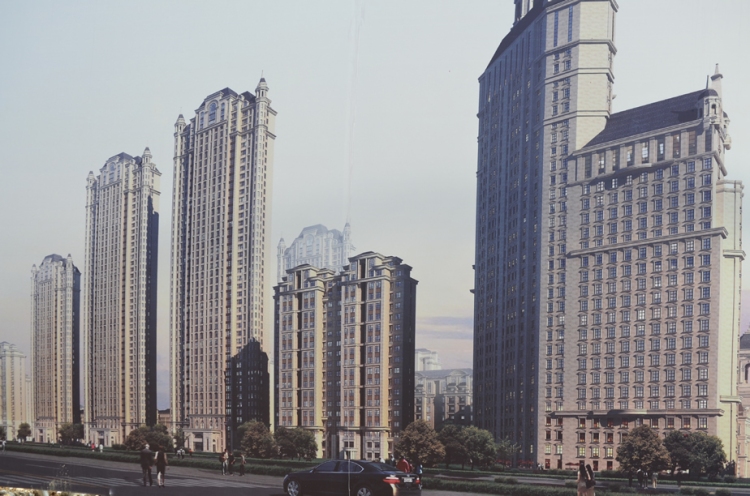 What it will look like they think, in a few years – now just empty holes.Well here it is 8 pm – we ended up going into Dalian and eating at Tapas Spanish restaurant which is a couple of blocks past the Korean Market  which is great – I had ‘berenjenas gratin adas’ (grilled eggplant), and ‘cremade espinacasy esparragos’ (spinach and asparagus cream).

We had a driver – one of Jack’s mates takes us in and wait for us to eat and go to the Korean Market to get a winter coat that Narda wanted me to get – one of those hundreds of dollars coats that one gets cheap. Narda had the coat go from 450 RMB down to 250 meaning about $35 US.  All in all as a last minute thought it was a five hour round-trip including dinner and getting my coat when all I really wanted to do was write some blogs for the day.

Interested in what comes next and not what was. Sole survivor from another place at another time with different outlooks on ‘the way it is' as I am mashing it together as a movie for my next lifetime to view this one so I can do it differently - hopefully on another planet or at least in another realm. For more see http://neuage.org
View all posts by Dr. Terrell Neuage »
« Home as a tourist destination
Jinshitan Storming »