Macclesfield is a small town on the upper reaches of the River Angas in the Adelaide Hills region of South Australia. 958 is what Wikipedia says is their population. Allegedly we upped it to 960 for a couple of days last week. Good on us.

That is not the story I will tell though, our addition to the population. That is a given.

My mate Sandy Mathewson sent us an invite on Facebook several months ago to hear his band, The BoogieMen, playing at The Goats Head Festival at The Three Brothers Arms over in Macclesfield. As one does in Facebook, we said yes. We were in Spain at the time so saying yes seemed reasonable. However, we forgot about the festival and anything to do with anything in Australia after we got back from three months in Europe and started busily planning our next trip overseas in six-months.

We complained how long before we got to go anywhere when Narda remembered last Thursday that we had said we were attending some sort of festival. I texted Sandy to say I thought we would go to hear him. We had not seen Sandy for years even though he lives half an hour away. I have known Sandy since about 1990. Back then we lived in Victor Harbour, with lots of ideas of what to do in life. One of those ideas was to start a radio station. Sandy was an ex-ABC radio dude and had lots of knowledge about the business, We started E-FM (Encounter FM; Victor Harbor is in an area called the Encounter Coast – has to do with Mathews Flinders first encounter with some other dude in 1802) in 1990. Sandy was president, I was secretary and newsperson (I was doing a degree in journalism at uni at the time) and several other characters were other things. Even our children were involved. There was a story about my children’s involvement in a magazine (https://www.neuage.org/neuage_radio.pdf) with photos. Over the next twenty-five years our paths crossed (oh, we both quit and passed the radio station on to some other people a couple of decades ago) a few times. I remembered Sandy as a very talented bass player so an opportunity to see him was good.

On Friday, the next day after we said we were going, we rang the Three Brother’s Arms to enquire about tickets; they had sold out, but were told they could probably rustle up a couple of tickets if we got them soon. We were also told we could park our caravan in town. Free accommodation had us packing our van and on the road three hours later. Macclesfield is only an hour away. We hadn’t been in our caravan for six-months and an excuse to get out of town worked for us. We definitely are restless nomads. I have been since age 16, fifty-five years ago. To make a long introduction short, we realised we did not need to flee Australia to have a good time and to be the on-the-road explorers we were meant to be.

To borrow a line on their webpage (https://www.macclesfieldhistory.com.au/). This small town from the 1830’s still retains much of its Old-World charm in this present era.

We found Davenport Square with a large parking area, public toilets, even a power point which I was quick to plug our van into for a few hours.

We were only a couple of blocks from The Three Brothers Arms. Actually, the town is not much more than a few blocks, with two pubs, couple of churches, a bakery and a post office.

The first place we found on our bike meanderings was the local footy oval – in Australia these are the sacred grounds; in the Adelaide Hills they are the Adelaide Hills footy clubs. Narda’s three sons have played many games here (they played for Birdwood; Stu, Narda’s youngest – somewhere in his mid-30s, still plays) but it is the two acres of once scrub land next to the oval that impressed us. It has been landscaped into a garden with walkways, seats and statues from local artists. The park is a memorial to various wars. For example, there is a brick paver for every South Australian military person who has served in Australia’s defence. There are memorials to dogs in the service, horses and camels from various wars, as well as every aspect and every battle Aussies have been in. Below are a few photos – if you get to Adelaide go to this park, it is well worth the visit.

My favourtie scuplture was this helicopter from the Viet Nam era made of horseshoes (I chopped out some trees to hopefully show the horseshoes better). More info from somewhere on the web tells us: “RAR Somalia Veteran, Greg Hopgood, unveiled his Huey made with nearly a ton of horse shoes. Commissioned by the Mt Barker District Council for the 100th Anniversary at the end of WW1. Using a 112-year old-hand-cranked coke forge, he carefully sculptured and created the Iroquois helicopter, commonly known as a “Huey”, which is synonymous with the Vietnam War.”

“RAR Somalia Veteran, Greg Hopgood, unveiled his Huey made with nearly a ton of horse shoes. Commissioned by the Mt Barker District Council for the 100th Anniversary at the end of WW1. Using a 112-year old-hand-cranked coke forge, he carefully sculptured and created the Iroquois helicopter, commonly known as a “Huey”, which is synonymous with the Vietnam War.”

We found a favourite café to purchase a meat pie for Narda and a veggie spinach-cheese roll for me (BTW, there is only one café in Macclesfield) and to learn about the town a bit. 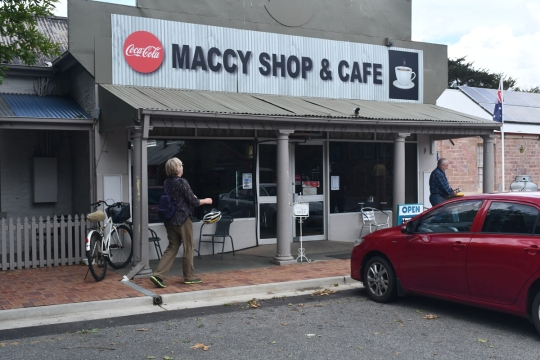 We were told that Macclesfield is on the ‘Hills Sculpture Trail’, with some cool sculpture scattered about at Crystal Lake. 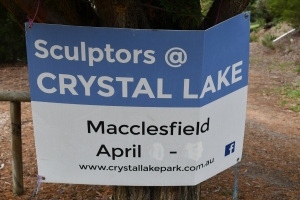 The sculptures are crafted by master sculptors from around the world every two years. The last one was in 2017 and the next is schedule for April 2019. Over nine days nine sculptors will be doing their stuff. We leave for the States mid-April and will depend on you to tell us about it and share photos. (don’t let us down) Other towns throughout the Adelaide Hills will be doing this too. In 2017 there were 26 sculptures done. Find out more at http://hillssculpturetrail.com.au/

We rode our bikes over to Crystal Lake only to not only discover some good stuff but to conjure up a memory for Narda; which she will tell…

I’m sure this is the site of a Bible camp I attended when I was 10 or maybe 12 years old! I remember this building with its metal double bunks lined up along each wall. This one was for the girls and there was another one (now gone) for the boys, and a dining area. It was a weird feeling, all those years ago; memories I thought I had forgotten. If anyone reading this blog knows more, let me know. There was also a small recreational lake, now wetlands, where I’m pretty sure we got to ride in small boats. I even remember the camp councillors saying early each morning to we-sleepers. “wakey wakey, wash, make beds”.

Here are some photos of sculptures we came across… 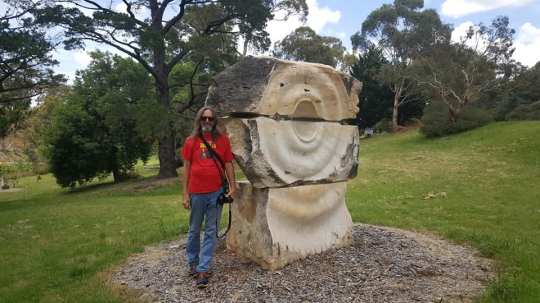 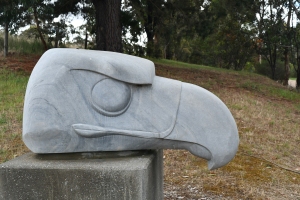 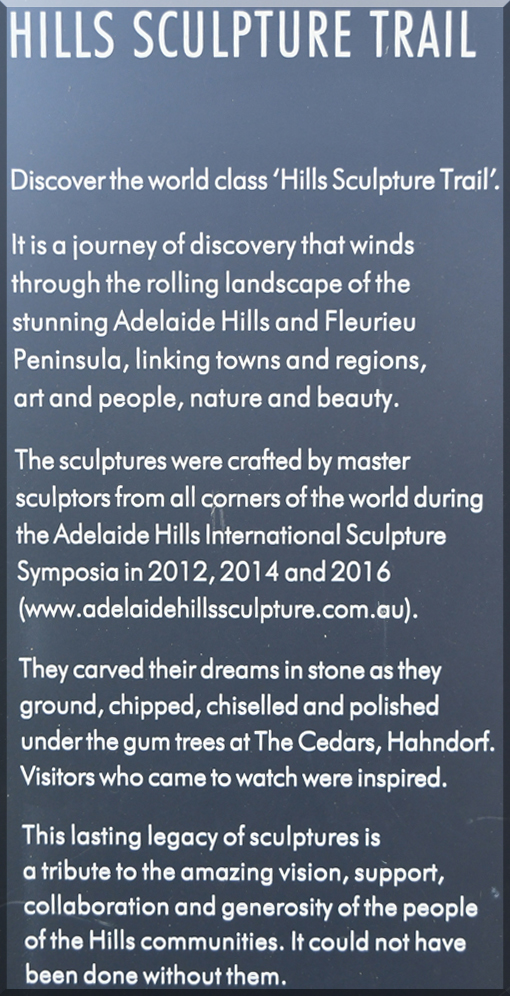 After a day of riding around, well two days, Friday and Saturday morning it was time to experience what we had come for, The Goats Head Festival at The Three Brothers Arms. It started at 2:30 pm and would go until midnight. Our bedtime is 9 so to be up with the young ones (those still in their 60s…..hey! careful….N) we took a nap and walked the two blocks from where we were parked to the venue. We were told once we went in, we would not be able to go back out which troubled us at first; the idea of nine hours in a pub was a bit hard to come at, especially as we never go to pubs, or out at night for that matter. We got a wrist band and made it clear we would need to leave to go to our home on wheels to get a jacket, take a nap, who knows what? We went in for half an hour listened to the first group and went back to our caravan for an hour then back to the pub where we caught up with my mate, Sandy. His group was not until ten pm, but he came in six hours early, so we could catch up with years of each of our adventures. Sandy has been playing with his band at local venues for the past couple of decades and he travelled too.  See https://www.facebook.com/The-boogiemen-126909057487071/ to check out where he is shaking up the neighbourhood next.  We told him about our travels which he has been following for years on Facebook and other spacey places but all we knew about him (except for making fun of people like me with our low-carb veggie diets and hanging on to a 1960s San Francisco/New Orleans/NYC mindset even when living in Australia) was that he had gone to Scotland. He looked up and tracked down his family genealogy from his father’s side and he had many great stories of that experience.

During the day we drifted in and out of the Blues thingy. We were very impressed by the Kelly Menhennett (http://www.kellymenhennett.com/) What a singer and performer! Be sure to catch her on your next night out. Sandy’s band as always had everyone up and dancing and gave us a good dose of the Blues. They were on only for 45 minutes which is not enough of their good listening and dancing music. Look up where they are doing a solo gig to get three hours of high-quality blues to top off your working day, retirement life, or just another week completed.

Then evening ended with the well-known South Australian Dixieland group ‘Gumbo Yaya’ https://www.facebook.com/gumboyayaadelaide/ a top Louisiana type of blues band. I have lived in New Orleans off and on for several years in the 1960s and 1970s (I was a streets artist along Jackson Square in the early 1970s) and even took Narda there six or seven years ago. New Orleans has always been my favourite city (next to NYC) and whenever I can I am listening to some of that Louisiana swamp music, especially blues from the early 1900s. 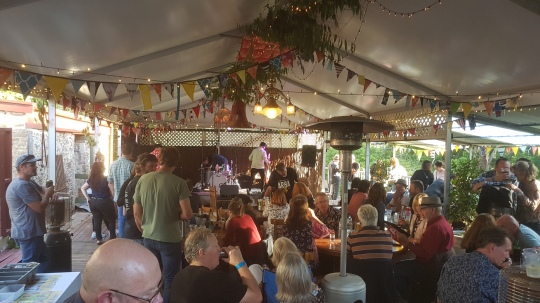 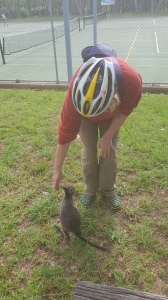 This is Misty. She was rescued from her mother who had sadly become roadkill. The kind lady who took her in is now her surrogate mum and Misty follows her everywhere. A beautiful little ‘roo, I believe she is a Western Grey,  typical of this area in the Adelaide Hills. We met her watching some kids playing tennis, trying to pick up some tips (we have started a new venture: tennis playing, inspired by tennis rackets and a vacant tennis court left for us in at our lovely apartment complex in Noja, Northern Spain.)

Thanks for sharing this moment with us.