to Yantai China on OK Airlines

I am not sure whether it is our airlines; OK Airlines, or the sign over the gate we are departing from that causes concern.  Not that I am concerned, this is China, what could possibly go wrong? I am sure these local flights are up to export standards. Like our shoes. We were just commenting before leaving home that we both have Rockport shoes that have really gone the distance, made in China. Narda got a pair she still wears from the Lake George, New York, outlet store ten-years ago and she has worn them in India, Viet Nam, Cambodia, tromping around France, Australia, Thailand, China and of course the USofA and they are still in good shape though she put a bit of superglue on them this morning but the leather is good. My Rockports I got at the same shop in Lake George about seven years ago and they are still good. We have bought shoes, bags and etc. here in China that fall apart quite quickly, so there must be an export quality that lasts. I am hoping the same is true of OK Airlines between here and Yantai where we are off to for the Fall/mooncake Festival holiday. The reason we are going there is because no other destination seems to be available. Narda looked at one place we had thought of going to and the tickets to there have gone from $200 US to more than a thousand dollars in the past week. 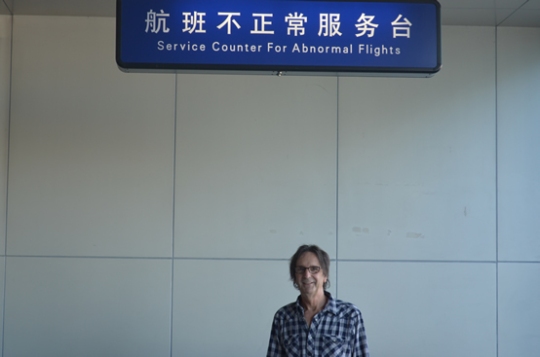 I did not know what to make of their airline magazine – did this say the airline was in ruin or that OK Air is groovy.

They are so polite about their air services at the Dalian International  Airport (think 1980s Albany, New York, or Adelaide Airport about 1985) they keep playing this loop “we regret to inform you that flight …. has changed gates…”. Usually the regret an airline would report is that ‘OK Airlines has run out of fuel and has landed on the freeway’. But that we are going from the gate for ‘Abnormal Flights’ seems something they should be regretting.

Not to worry, we are coming back on the ferry – about 6 – 8 hours. We looked it up, a huge boat, and there was a Google story about how a few years ago the same line had their ferry catch fire whilst between Yantai and Dalian and 22 people of the 300 on board survived. Now Narda is a bit nervous about the ferry.

We have been talking about disasters this whole holiday (well the first two days of it).  We decided to climb to the top of our local hill which has a great view of the sea, our school and valley.  This picture does not do our climb justice – it took us almost two hours to get to the top and we were so puffed out. In the distance is our school and behind the strange ship they built along the highway headed into our resort district. 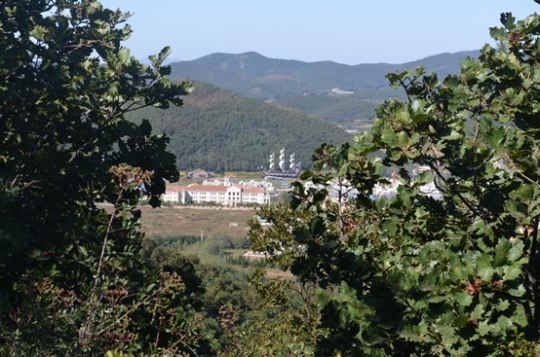 Continuing with our disaster conversations we worried what to do if a poisonous snake crossed our path, then we worried about what to do if there was a forest fire and we got caught then we wondered if there were bear or other crazed creatures in the woods then we just worried. It took us another hour to get down and we ended up at the local spa but their prices were out of proportion to what we made as teachers so we walked home.

Here I am at the Five-Star Golden Pebble Tang Dynasty International Hot Spring Resort at the bottom of the hill – which was a mountain to us, with my mate, obviously a remnant of the Tang Dynasty. I told him I was a Leo but he didn’t seem impressed or to understand so we walked on in blissful ignorance of our un-importance. 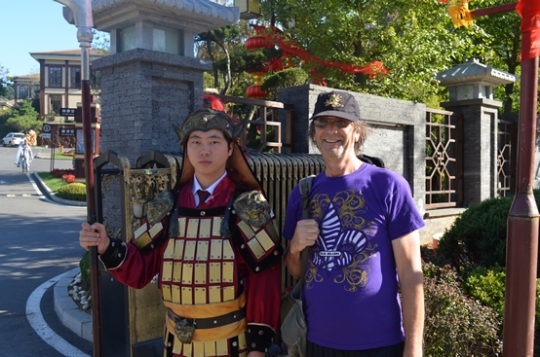 Another view of our school and where we live at Campus Village.

View of the sea from the top. 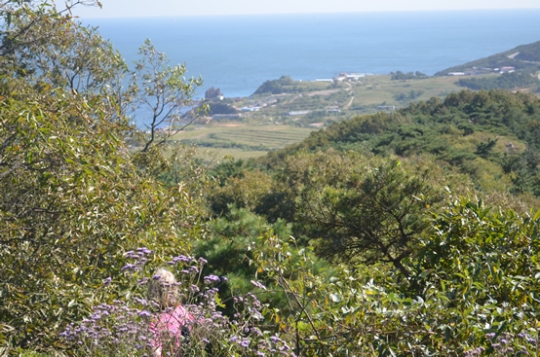 My concern re. the small plane we are taking to Yantai is that the wheels look to small and I am sitting right across from them and the propeller seems to be going a tad bit slow…

And what is with the writing on the side of the plane facing my seat of where to evacuate?  Evacuation Direction – damn… I never know what to do in those kind of situations. And there was no pre-flight speech about dropping down air masks and putting them onto the children last or is that first?

but I did get to like our little plane –

which did get us safely to Yantai.

But those bloody Chinese cab drivers – ours give us the fright of our life all the way into town; weaving, and creating lanes where there was none and going way too fast and of course there were no seat belts in the back. I am always terrified driving in a cab in China but then again we did arrive OK.

We wanted to go five-star but not at a Western chain so we picked the only 5-star Chinese because we want soft beds and most hotels the beds are incredibly hard. We are staying at the Golden Gulf Hotel – an old hotel right on the shore. And what a great walk along the coast it is. We like this city – so far, the most of any we have been in. We even found the old area, a Hutong, right behind the hotel – kind of a Chinese New Orleans or old town in Barcelona.

not to worry – we got the buffet dinner and that was really quite good and now off to a soft bed and tomorrow is Tuesday and we do not have to go to school and write up bloody lesson plans or standards or whatever mind-numbing thing we are to do in the future. Why we can not be like the world’s best schools – Finland – where they start at age seven – that by the way is when I started at Shenendehowa Central School in Elnora New York in 1954 – the first year of that school – and look at me… well I left home at 16 – didn’t finish tenth grade – but at age 44 to 58 did every uni degree possible and now, like the Finnish schools I feel a academically OK – maybe I am an OK Air type of person after all.