Nothing says “this is Hawaii” better than having Elvis with some hula girls singing on Waikiki Beach. Yes, it is him – the reason it is blurry is because no one was supposed to have seen this. Like in those UFO photos.

What is more iconic in Hawaii than Elvis with hula girls? Well Elvis with Narda, of course. She looks so happy with him. Luckily, I am not a ‘jealous guy’ as Elvis once sang to me.

Narda duets with Elvis at the Aloha Tower

Today we had a bit of a late start – got out of our flat at 12:30. This Hawaiian slow-mellow-relaxed life style is good for us. We grabbed a bus to downtown Honolulu, passing Queens Medical Centre where I worked for a couple of years 1980 – 1981 well closer to a year really. I worked in the locked psych ward – not just with loonies but a bit dangerous ones. We used to give some electric shock treatment; not me but the doctor and I was doing the nursing thing of strapping them in and sitting with them when they came too. I hated the whole process and thought it was a bit mean. So, we wandered around Honolulu for an afternoon. Went over to Aloha Tower, had some lunch and watched a ship come in, and I tried not to talk about my past all the time as that is annoying.

(I was kind of asked not to include my thoughts about the below image but I can’t help myself) We had stopped into Walmart for the loo-toilet-bathroom, whatever they call it in the States, and I was looking at toys as one does. I was fascinated by this particular hula girl doll and the fact that ‘Moana sings her iconic movie song, “How far I’ll go”’ with bold lettering at the top telling us to “TRY ME”. I have no idea what is going on here. My only frame of reference comes from my male reptilian  adolescence brain. And that is all I will say on the topic. I did not purchase it. After a few giggles and being told that I was “not funny” I went on to think about some other thing though I can not recall what. 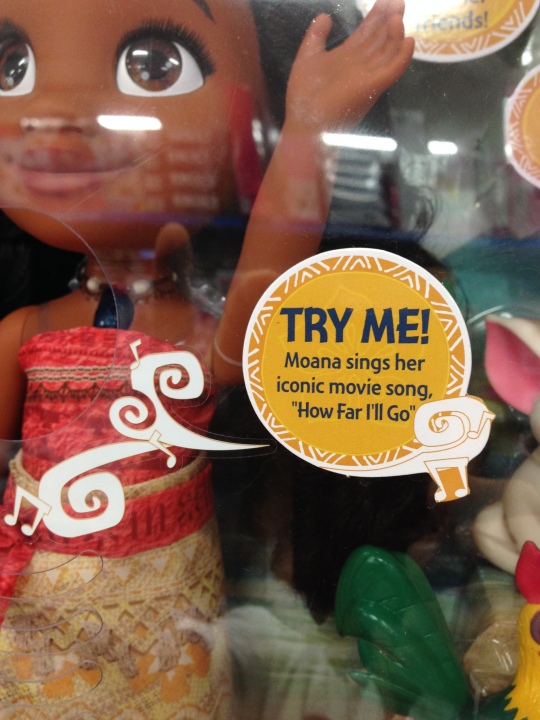 I really dislike all the cat and dog things people post – how annoying; saying that, I thought this was an interesting shot. Actually, the dog should be getting exercise and it seemed more interested in my pack of imported spicy Korean Seaweed in individual packs or perhaps the dog near me, than walking.

dog in a basket

We had a nice sun-setting evening with the beach only two blocks away from home. Finally got my sorry-ass into the water and had a bit of a slash then we sat on the lawn and watched the day disappear into the sea. We love Hawaii and this is another place we could live for a long time though it looks like Southeast Asia is best for us.

We got into a chat on the beach-lawn with this guy from Alaska, who’s girlfriend is from Bulgaria. OK, time for more research. I edged the topic towards the recent election. His response was quite moderate, though he said he voted for the T guy (can’t bring myself to write the word). He said he had also read Obama’s book ‘the Audacity of Hope’ and had concluded that he was a really decent fellow. So there. Another take.

I am an American, though part-Australian having lived there for twenty-four years. My American part sure quickly comes out; especially with sports. I almost forget about NFL or worry about the ups and downs of the New York Giants, when living in Australia. Here there is always NBA, or NFL on or college games. Hawaii Uni won yesterday and got themselves into a Bowl game. Folks here are excited. Not that we sit around and watch sports but I do sneak in a view now and then. Half the people in this area are tourists from the Mainland and the other half are from Japan with .004 % from Australia, New Zealand or some other distant place. I like the Americanisms though it is difficult to pick them out specifically. I feel like a tourist in Australia and still get lost in Adelaide after living there for more than two-decades. I get lost in Hawaii and on the mainland too but I feel less lost.