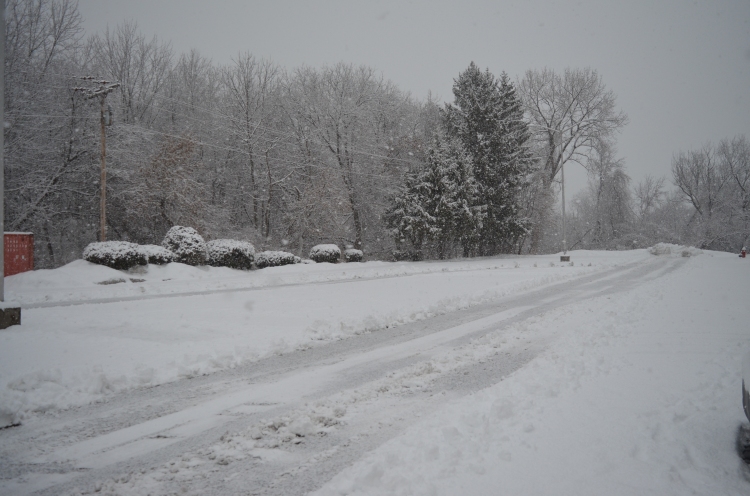 then our loving GPS took us into even deeper snow

But now both the GPS and Google Maps were really mad at us. We were motoring happily along on interstate 86 headed toward Binghamton and yes, of course we would have to head east at some point but first one then the other got us on to some smaller road which led to a smaller road. Because it was getting to be late afternoon and the temperature was dropping to below freezing (-2 C or something below 32 F) and there was some snow or rain or drizzle falling we saw several cars that had slipped off the road and two that had just crashed. We got to another turn off and yelling at our directional devices, which by the way does no good, continued like idiots following their looney-bin directions, until we were stopped by some emergency vehicle and told that we had to turn around and go back because the road we were on was closed due to accidents. By now we were really getting lost and after finding this quaint little town, Walton, we were sent off onto even a smaller road – like one lane. We asked a man walking a dog how to get to Oneonta and he pointed to the road ahead and named a litany of strange sounding roads thereafter. He ended by saying that his mother was from England too. Not quite the right thing to say to an Australian and as Narda was driving and on an icy road she was unable to do a burnout but following the man with the dog and a mother from England and our GPS and Google Maps drove us forward until we got to a hill that we could not get up. We spent a long time turning around inch by inch and slowly headed back to the bit larger road we had been on to begin with. We got up to Franklin and instead of putting us onto the main highway (route 88) our Google Maps (by now we were so mad at our Tom Tom GPS that we locked it up in the glovebox) took us through many winding streets until we got to my sisters fifteen minutes before her son had to catch a bus back home in northern NY (Potsdam I think, on the Canadian border) but I did get to see Dustin before he left.

This site uses Akismet to reduce spam. Learn how your comment data is processed.