Robert said he heard his mate calling him from mid-north SA. So he and his wife packed up, and moved there. They bought a house for $90,000 opposite Robert’s mate’s garage. He told us about the murders in Terowie.

“Just like Snowtown”, he said, “Maybe worse. These victims were buried in a wall.” (any American reading this may like to Google “Snowtown murders, South Australia…chilling reading)

It was a warm Saturday night, around 8 o’clock when all the young ones are out partying, or having expensive dinners. Not in Terowie. There was one young one. We saw her sitting on the swing in the local, nicely kept, playground. This was in the afternoon, on the Saturday. We returned later and she was still there, swinging.

But the boys were out, with cans of West End, sitting on upturned buckets and some old car furniture, shooting the breeze with Robert’s mate. This was where and when we found them. We had just set up camp on the nearby railway siding. We were feeling quite pleased with ourselves, with our shady little spot, free, and our new bike rack.

Then we discovered one major puncture in one of our bikes. Bugger. We remembered passing this servo on the way in, so we walked along the main street till we found it. And there they were. Action in Main Street. Having nothing to lose we asked the mechanic (Robert’s mate) if he might have time to fix the hole.

Nice bloke. He was the only one working, among the boys and their West End cans. We returned later and joined the friendly banter. That’s when we learned of Robert’s life story, his mortgage, the murder and many other things. In the end the mechanic refused to charge us. Blimey. We felt a little humbled.

That is Terowie. A little town at the end of its life. In its hey-day there were 2000 folks living there; a town of lovely stone buildings, a bustling railway town, where broad gauge trains have to unload their passengers, their animals and their goods, and reload them onto narrow gauge trains, heading north.  Now the town is sad. A few buildings; the blacksmith, the old post office, and the old general store have been converted into museums, but there’s no-one there.

And yet, it keeps on. A big “RV friendly town” sign welcomes you as you drive in. The toilets in the main street are kept clean by an unknown person, for the convenience of Grey Nomads, who camp at the railway siding for free. The mechanic, who is also the owner of the large Victorian hotel, used to offer counter meals. He recently decided to stop, because “the pub in the next town is also struggling, and there are not enough customers for us both”.

Why is this? There is a giant wind farm only 20 minutes south, with millions of dollars invested in hundreds of giant wind mills. Why is this not bringing some wealth into the area? Robert, who knows such things, told us that the money goes to NSW, and we don’t get any benefit as a state, certainly none as a town.

So there it is. We spent three days there; but it made quite an impression. The town has treasures, like absolute silence; what an unusual gift, and clear black skies where you see the colours of planets. It is enough. And if you’re wondering about the bodies in those walls, ask Robert. We have no idea. 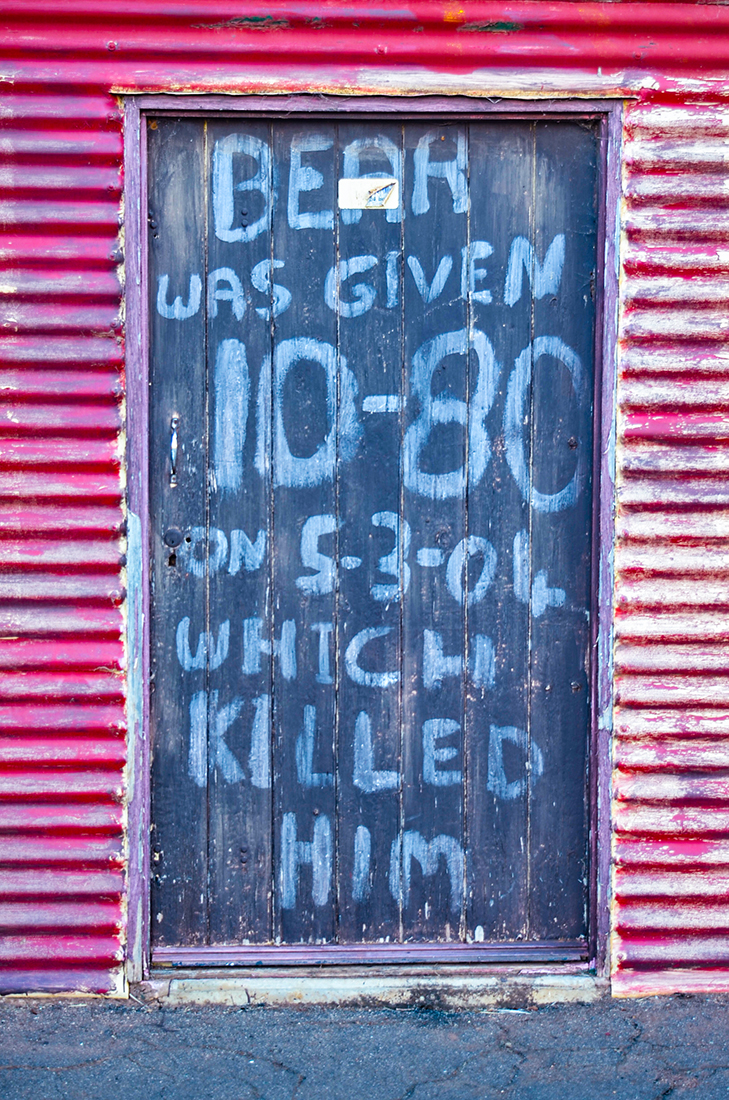 Our Video – with kangaroos and real outback footage and heaps more – for first time internet users click on the white arrow in the image below – everyone else do the same.

Our first stop, real stop, not counting Elizabeth twenty-minutes from home was in Saddleworth, in the Gilbert Valley, approximately 100 kilometres north of Adelaide.

Wanting to be accurate I looked up Krispy Kreme store-locator. I am sure it is Elizabeth but I wanted to be sure. Perhaps their IT department needs to work on their location finder. It said the nearest one was in Missouri and Google provided a map to there which was most helpful.

Saddleworth is definitely a town that looked worth exploring. There is a caravan park there but we did not see a free site so we kept going. 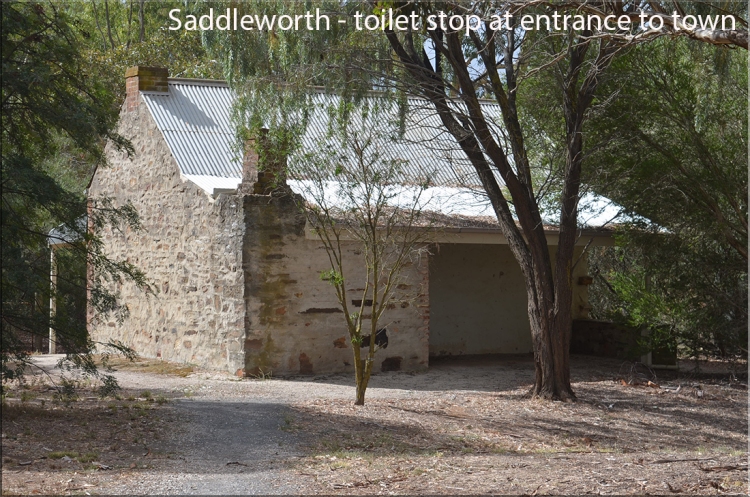 We were having a bit of a bother with our Pajero which had an engine light warning. We had it looked at and some minor repair but ‘Billy’, our Pajero (our caravan is “Holiday”) was feeling a bit under the weather and the further we went the worst he felt. By the time the trip was over we could barely make it up a small hill even in first gear. Currently Billy is booked in for surgery next week and Holiday is at the caravan shop getting a review of her situation with some add-ons such as solar panel so we can go further afield and do more free camping. We did limp into Terowie, a town we had passed through several years earlier. I even bought a fridge magnet there. This time the town was very quiet and though the entrance sign boasted 150 residents, most of those have since gone and places are for sale at bargain prices. We looked at the post office that was for sale for $105,000 with land, four bedrooms, all modernized with beautiful floors – I want to be the mayor of Terowie and being a Leo is really all the qualifications I need to succeed and Narda could be the post master.

We were alone at the free-camping along the rail-line the first night and the second night there were four others. The area was so large that everyone was very spread out and we did not have any contact which is fine with me but Narda likes to meet people and get stories such as above. I just want to be in a quiet place to write a novel or another version of my memoirs. (you can read my  original version of ‘Leaving Australia’ @ http://neuage.org/e-books/

We chose this town in part due to the flatness of it. After six-weeks recently in Holland and riding every day – even in the snow (this was January – February 2017) we were up for riding more. Our house in Adelaide is in a bit of a hilly area so we rode heaps – though there was not far to go; one end of town to the other – well there is five-minutes of our life gone. We did ride around the ‘suburbs’ which took another fifteen-minutes. This is a photographer’s dream place. I did not get anywhere near the amount of photos a ‘real’ photographer would have gotten. There are four or five old churches on one street, not Main Street, a couple old pubs and lots of buildings.

This was an important train stop between Adelaide and the North. One of their main claims to fame here is that General Douglas MacArthur paid a visit here with his family after WW II. For Australians MacArthur was some military dude for the USA, a five-star general – which is a lot, who was quite important during the time he was important. 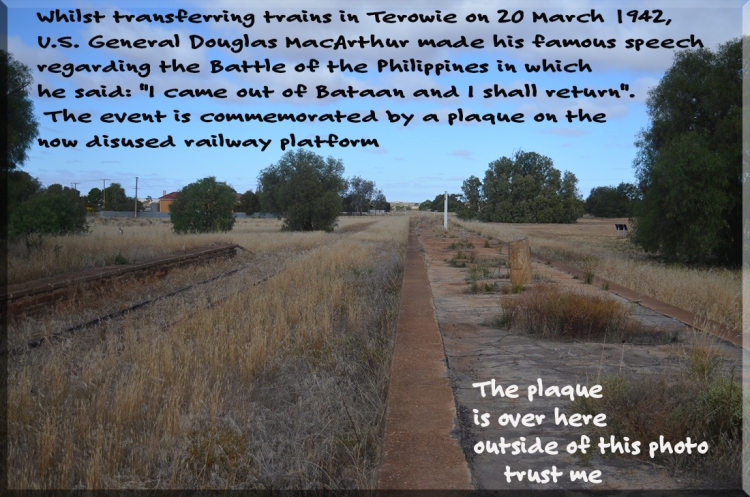 We decided to go to a place called ‘World’s End Reserve halfway back to Adelaide. Due to a combination of not getting internet where we were and our GPS, which hates us (I have spoken of this in a previous blog) we got hopelessly lost on a gravel road and never did find the place.

Interested in what comes next and not what was. Sole survivor from another place at another time with different outlooks on ‘the way it is' as I am mashing it together as a movie for my next lifetime to view this one so I can do it differently - hopefully on another planet or at least in another realm. For more see http://neuage.org
View all posts by Dr. Terrell Neuage »
« Cambodia
“Coburg’s Earthmoving is serving Yabbies” »