Shenzhen for a weekend

Shenzhen for a weekend a few weekends ago; other cities always look so great; Shenzhen is best. We had a two-bedroom, three-bathroom apartment for two nights with a balcony opening from each bedroom and the living room on the 15th floor with view of Hong Kong Harbour and Hong Kong.

In China it is not being where you have gone to but getting there that is the amazing experience. I am more surprised by the fact that we arrived at our destination in one-piece than anything else. Our taxi driver from the Shenzhen Bao’an International Airport (深圳宝安国际机场; formerly named Shenzhen Huangtian Airport) not only drove at the highest speed his wobbly rusty cab could go, weaving in and out of traffic, beeping his horn the whole way – ‘out of my path got Westerners on board’ but he blinked his high-beam lights all the way.  We would get really close to someone’s bumper and he would flash his high-beam on and off and beep then swerve around them. Luckily for all of us it was only a 45 minute ride of terror. I suppose in my younger years instead of going to a theme park and riding a terrifying ride I would have just gone to China and grabbed a taxi for a death-defying thrill. We have only had one close accident – well every time getting in to a car in China is close to an accident – we had the bonnet or hood (depending which country you associate the front of the car with) come up and break the window but that one time the driver was actually going close to the speed limit and there was no one in front of us to smash into. We had our bit of a scrape last July on the interstate in Mississippi in the US of A when at 70 mph a truck sideswiped us sending us across a four lane busy highway see https://neuage.me/2013/02/01/a-piggly-wiggly-story/ but in China it is always like this driver is going to kill us. But as one would have suspected by now – he didn’t.

Traveling with Narda one realizes comfort is number one. Most places we seem to change rooms. In Hoain, Viet Nam we changed after one night, too close to the road, OK so the new apartment was a good place for a week. In Hanoi a couple of months ago we lasted one hour before Narda was at the front desk getting us a room change – forget why now.

(In 1962 France launched a ship named Ancerville, which was purchased by the People’s Republic of China in 1973 and renamed Minghua. 10 years later the ship was permanently berthed at Shekou, Shenzhen, where she was refurbished and rebranded – this time as the hotel and entertainment complex, “Shekou Sea World. The Minghua was berthed at Sea World Plaza, the water which originally surrounded her has been reclaimed to allow construction of a golf course. The land reclamation continued southward, and today the coastline has been moved several hundred metres, leaving the Minghua completely landlocked.)

We arrived at the Frazier Centre at midnight and took a strong sleeping pill so nothing would disturb us, went to bed and damn it was a Chinese bed – might as well as sleep on the floor.  Once; on a weekend rafting trip, we took a pillow top mattress with us, rolled tightly and stored in the bus cargo area.  That was a worthwhile decision as the typical Chinese bed was rock hard.

I was tired enough to sleep on the floor if not the bed but Narda was already half out the door saying we needed to get a different room. Not to argue I opened the door and watched her rush off to the elevator.

Ten minutes later she returned; bellboy in tow carrying a large pillow top mattress; we did have a king size bed. Together they made up the bed which was a bit funny as Narda and I were feeling the effect of our sleeping pill, and we no surely most have appeared rather drunk. Nevertheless we woke the next morning, a good six hours later, with some I disturbed sleep behind us. As usual, Narda was right getting us more comfortable.

We got to Campus Village a couple of years ago at two AM where we still live, though of course we have moved apartments since then only to discover our bed was hard. Fortunately Nard saw a pillow top mattress in a storage room the very next day and soon the security guards were lugging it to our apartment. Since then we have purchased another mattress to add to it sows have a pretty good bed by now. Not that I Am suggesting a pattern here but that first week Narda moved her classroom too; understandable as the room assigned her was not really suitable. If only others would realize what I did years ago; she is often right and the best judge of what we should have so do it right from the get go and let the good times roll.

We had our weekend workshop at Shekhou International School in the Shekhou area of Shenzhen, a five minute walk from the Frazier Apartments with now a rather soft bed.

We were at an ipad work shop which is good in itself but we are a PC school and I was told not only would our school never have macs installed but that we would never have ipad support but here there are four of us keeping up with integrating technology in education despite administration. Because the most important basis to education is to provide tools for 21st century learning and at the present time the ipad is the best resource available to students. Many of our students use macs and iPads and instead of trying to hide from this fact I want to have the knowledge to support their learning which is why the other three teachers from our school were there.

Narda’s fellow music teacher uses his ipad in all his classes and so did our previous music teacher who left to teach at a progressive international school in the Middle East. Narda was reluctant to get an ipad but by the end of the weekend she loves it and will be making good use of it. I personally do not have a great desire for it as I make webpages, program with Flash and create videos and newscast which I use my laptop for and will for some time. At the moment I am writing this on my iPhone using Pages which Narda downloaded yesterday onto her ipad which downloaded to my phone as we share our apps account whilst flying. 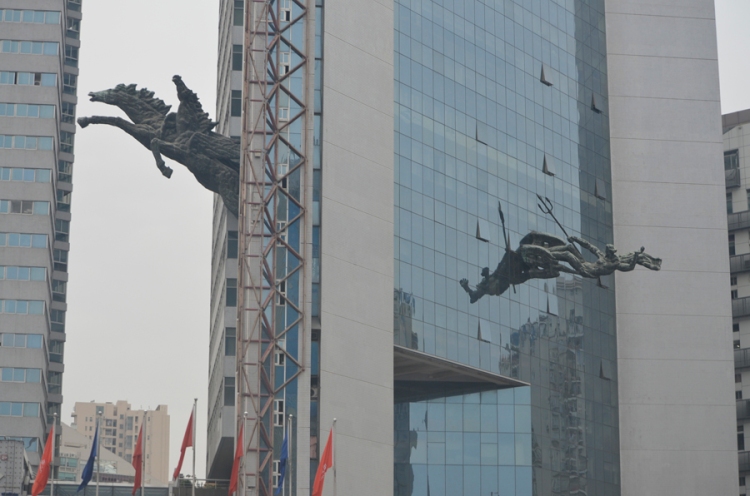 Not sure why they have statues coming out of buildings but in Shenzhen they do.

OK a couple of weeks later and the iPad is in the drawer. We have given up trying to get Ted Talks with the Internet speed here; even leaving it on overnight does not produce results. But we will re-visit it soon.

The International School of Beijing (ISB) like  Shekou International School is a beautiful school. SIS has three campuses and we were at the elementary one whereas ISB is one large campus with 1700 or so students K – 12. I went to see the video/film program as I am putting together one at our school. Not much to say except it would be a great place to work. Beijing as always was quite polluted. I got the app for my iPhone ‘China Air Quality’ which was probably a bad idea as I am a bit obsessed with it keeping track of my local town of Dalian. Today Dalian is ‘slightly polluted’ at 106 and at the moment Beijing is 398 (‘very unhealthy, protection recommended). When I was there it was about 450 – choke choke, and there was a time last month when it was off the chart at close to a thousand. Shanghai, where we are spending next week is either 133 or 68. On this app there are two readings for most cities. One is from the US Consulate – 133 for Shanghai the other, 68, from the Chinese, so one can follow which ever. I tend to believe the Yanks – not sure why.

ISB is outside of downtown but the pollution is still evident. When I was there a soccer tournament was underway and I couldn’t help wonder why people would pay so much money to have their kids at a top school but where the air is so unhealthy and with them running around gasping for air and kicking balls.

I collected information on their film/video program but with them having about ten times the budget I have, even with a recent healthy grant to get some equipment, I will not be competing well in any film shows these next few years. They had a wall of trophies and plaques for competitions they have won in the Asia arena.

And that is it. Two great schools in two weeks and now when we go to Shanghai we will be at the EARCOS Conference at Concordia International School Shanghai.

Interested in what comes next and not what was. Sole survivor from another place at another time with different outlooks on ‘the way it is' as I am mashing it together as a movie for my next lifetime to view this one so I can do it differently - hopefully on another planet or at least in another realm. For more see http://neuage.org
View all posts by Dr. Terrell Neuage »
« Somewhere over ancient China
Shanghai again »